Wolves 1-0 Leeds United: Boubacar Traore’s strike sees the hosts through to the Carabao Cup fourth round Wolves 1-0 Leeds United: Substitute Boubacar Traore’s 85th-minute strike sees the hosts progress to the Carabao Cup fourth round at the expense of their Premier League rivals.

By Tom Collomosse for the Daily Mail

Julen Lopetegui wants a Carabao Cup tie for this first game as Wolves manager after substitute Boubacar Traore’s late strike was enough to send them into the last 16.

The Spaniard’s coaching staff watched from the stands at Molineux, with Lopetegui expected to take formal control over the weekend and watch Saturday’s clash with Arsenal here.

Despite Wolves’ struggles in the Premier League, progress in this competition at least gives Lopetegui something to build on when domestic action returns after the World Cup. Leeds could have new owners by then, with US-based 49ers group now believed to have the funding in place to complete their long-awaited takeover of the Elland Road club. 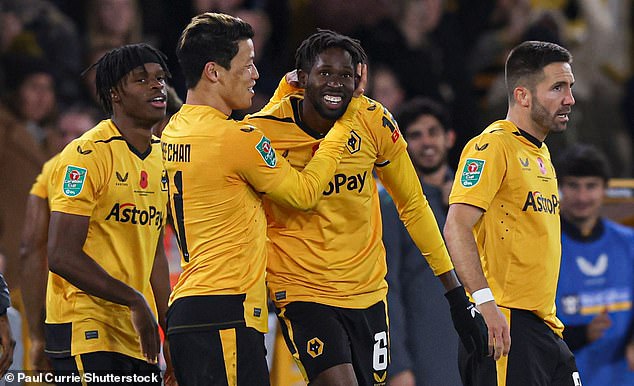 Despite resting most of their key men, Jesse Marsch’s side still created the better chances and were a little unlucky not to take this one to penalties. But Wolves will take everything they can get right now as caretaker boss Steve Davis prepares to hand over to Lopetegui.

With four debutants in the starting XI and against a strong Wolves side, Leeds might have been expected to start cautiously. Quite the opposite.

Matija Sarkic, brought on by Wolves to give Jose Sa a rest, did well to push behind Jack Harrison’s deflected free-kick and then Diego Llorente’s header from the corner was deflected wide.

Moments later, from another corner, Llorente was again first to the ball, making a fine stop from Sarkic before the ball was hacked clear.

Leeds’ front four had two players – Sonny Perkins and Mateo Joseph – making their first senior appearances and both were lively, while fellow outfield debutant Darko Gyabi did a solid job in midfield.

In the early stages, Leeds were flying but slowly Wolves stemmed the flow, never producing a sustained period of pressure themselves.

Attacking Molineux’s South Bank in the second half, Wolves started almost perfectly as Goncalo Guedes held off his marker and set up Kilman, forcing Joel Robles to save with his feet. At the other end, Harrison slid into the box and Sarkic was relieved to see his delicate effort slide narrowly wide.

Back came the Wolves. Guedes drove forward, fed Rayan Ait-Nouri on the left who crossed for Connor Ronan. The midfielder almost marked his first start in five years with a goal, only for Robles to claw the volley away. Then Kilman made an equally important intervention to deny Joseph a run on goal.

Wolves finally made their mark six minutes from time when Daniel Podence sprinted down the right and set up the route for second-sub Traore, who fired past Robles from 20 yards.