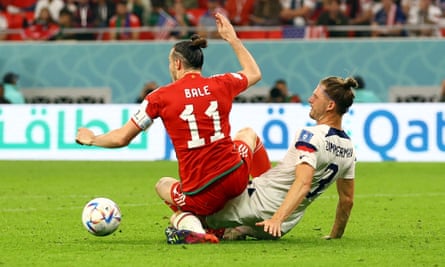 For the better part of 80 minutes on a chilly Monday night in the Arabian desert west of Doha, it looked like America’s much-vaunted golden generation finally took flight, perhaps ahead of schedule. More than five years after they failed to qualify for the 2018 World Cup and almost eight-and-a-half years since their last appearance at the tournament, the second-youngest team in Qatar were returning to the sport’s biggest stage.

Christian Pulisic dribbled out of pressure, ran at defenders and created attacking chances from nothing. Sergiño Dest and Antonee Robinson made overlapping runs and fired away from distance with confidence and eagerness. The gifted midfield trio of Weston McKennie, Tyler Adams and Yunus Musah did the lung-busting box-to-box handiwork that has become their hallmark. One of the youngest teams the U.S. has ever fielded at a World Cup, operating with a collective poise and composure beyond their level of experience and an edge of aggression promised by their manager, kept banging on the door until they burst through with a goal nine minutes in. before break.

Even as Wales fine-tuned their tactics and increased the pressure after the break, the young Americans held their nerve and looked set for three points and a dream start. That is, until the 82nd minute, when the American centre-back Walker Zimmerman recklessly hacked down Gareth Bale from behind in the penalty area with the opponent’s back to the goal. When the Nashville SC defender’s animated reaction (“No, no, no, no!”) was caught by the TV cameras, the referee pointed to the spot.

Within moments, Bale had fired the penalty past Matt Turner’s fingertips to rescue a point for the side the Welshman almost single-handedly carried back to their first World Cup final since 1958.

“From his vantage point, [Zimmerman] thought he was going to be first to the ball, Berhalter said after the game. “It is what it is.”

There is perhaps no more oft-cited reason for optimism around the US these days than the number of Americans—far more than ever before—who have gone abroad to trade in their teens. More than half of Berhalter’s 26-man squad for Qatar compete in the world’s top five leagues, including Pulisic (Chelsea), McKennie (Juventus), Dest (Milan) and Adams (Leeds United), the team’s newly-minted captain.

Berhalter’s team selection for Monday’s game, and how he valued MLS-based players in a competition the United States simply could not afford to lose, spoke volumes. All but one of his 11 starters represented clubs in Europe, the most ever for an American lineup in a World Cup match. Six players play in England, two in Italy, and one each in France and Spain. The lone starter from Major League Soccer? You might have guessed it.

That’s not to pick on Zimmerman, who can’t feel particularly good about costing his team so dearly when they return to the World Cup. Nor in America’s top division, which has made huge strides in quality since its inception a quarter of a century ago and continues to do so much to grow the game stateside.

But for those who believe that the United States won’t really be able to contend in the World Cup as long as MLS players are on the national team, well… it is what it is.

Although the U.S. showed growing pains in the extended run-up to Qatar, Berhalter has resisted the notion that his aggressive youth movement was more about looking ahead to the World Cup in four years, when the U.S. will be co-hosts and today’s core players will be in their presumptive prime. “We want to build a ton of momentum into 2026,” he said last week. “But everything begins now.”

He wasn’t kidding. And the first half of Monday’s game offered a glimpse of the higher ground where the American team could be headed. But Zimmerman’s costly blunder showed just how far the Americans have to go while largely brushing aside what should have been the story of the night: Tim Weah scoring for the United States in the tournament his famous father never got to play in.

It’s not always easy being the son of a head of state, much less the offspring of the greatest African footballer who ever lived. The shadow cast by George Weah – the star striker of AS Monaco, Paris Saint-Germain and Milan and the only African winner of the Fifa World Player and Ballon d’Or – was long lasting even before he was elected president of Liberia.

The younger Weah was eligible to play for France, Jamaica and Liberia through residency and his parents’ citizenship, but chose the US (he was born in New York and spent part of his childhood there and in Florida) and came up through the US youth system. After scoring on his international debut in a friendly against Bolivia in 2018 and becoming the fourth-youngest player to score a goal for the United States, Weah managed to maintain a foothold in the team despite a brutal series of injuries.

On Monday, Berhalter’s belief paid off when Weah, now 22, conjured the winner after a forward and perfectly threaded pass from Pulisic. It made him the first player to score against Wales in a World Cup since a 17-year-old upstart named Pele eliminated them from the quarter-finals back in 1958.

Now the U.S. looks forward to Friday’s match with England and next Tuesday’s group stage final against Iran, which famously eliminated the U.S. from the 1998 World Cup. The road to the knockout stage is still right there from Berhalter’s romper room, just harder than it needed to be.