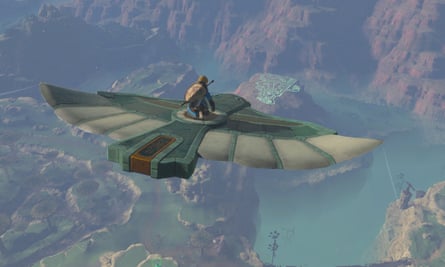 It’s not too much of an exaggeration to say that 2008’s Dead Space is to video games what Alien was to movies: ambitious, gory, terrifying sci-fi horror that raised the bar for an entire genre. This remake involves some of the same talent, and will bring a skin-crawling classic to a new generation of gamers.
PlayStation 5, Xbox Series S/X, PC, January 27

2015’s Kerbal Space Program had you helping an alien civilization figure out how to get to the moon, with plenty of explosions and physics-based mishaps along the way. The sequel has the little green space travelers going further, heading for the stars and establishing colonies. Expect a loving and deceptively demanding space travel simulator.
PC, PlayStation, Xbox, February 24

The Legend of Zelda: Tears of the Kingdom

Considered one of the best games ever made, the sequel to Breath of the Wild was always going to create anticipation. Here, the sword-wielding hero Link explores not only the continent of Hyrule, with all its cartoonish monsters, puzzle-filled dungeons, tantalizing treasures and hidden secrets, but also the skies above.
Nintendo Switch, May 12

A science fiction role-playing game from the champions of emergent, player-led stories at Bethesda. Travel light years beyond our solar system in your own custom-built spaceship and find your own purpose among the stars. Those who yearn for the glory days of Mass Effect will find a lot to look forward to here.
Xbox Series X/S, PC, Spring

Vampires run amok, and not the sexy kind. A co-op shooter where you must team up to defeat the creatures of the night on an island in Massachusetts – and luckily, you have your own supernatural abilities to bring to bear. Will you become a magical sniper, a gadget-loving cryptozoologist or a telekinetic student?
Xbox Series X/S, PC, Spring

A farming game with a difference: instead of laborious chopping and seeding by hand, you have access to a really cool robot. Dress up in your mech and you can water, harvest, build and landscape with ease – and the planet you farm has an exciting story waiting to be uncovered.
Xbox, PC, spring

Fans of Blizzard’s demon-slaying, treasure-clicking, loot-hoarding hell hack-and-slash series will approach Diablo IV with some trepidation, as it promises to steal many, many hours of your life. This is an old-school D&D-style fantasy—you can play a villain, necromancer, sorceress, barbarian, or druid—along with terrifyingly compulsive game design.
PC, PlayStation, Xbox

A game about tiny alien flower creatures in a garden, where you – an equally tiny spaceman – must muster them against the creatures and threats lurking there. It offsets the soothing surroundings of nature with the low-level stress of trying to keep your teenage charges from being engulfed by wildlife.
Nintendo Switch

One of the longest-running series of video games is back, inviting us to punch and kick each other in spectacular Technicolor style. Features a Shenmue-inspired single-player adventure mode for the first time, along with the usual PvP tournaments, and a friendly, simplified control scheme for newcomers.
PlayStation 4/5, Xbox Series X/S, PC

Hollow Knight is an exceptionally creepy and atmospheric dungeon delver where you slowly uncover an underground world filled with strange insectoid creatures that look darkly cute but will probably kill you. The movement and fights are just so crisp and balletic. This long-awaited sequel has no set date, but I’d bet this is the year.
PC, Nintendo Switch, Xbox, PlayStation

Returning to her hometown, Jala must confront her disappointed parents and a phalanx of bitter exes in this stylish, engaging game about cooking, skateboarding, and (literally) grappling with your past. It has elements of Bollywood, Scott Pilgrim and cool roller skating game Jet Set Radio, a combination that is sure to have never been seen before.
PlayStation, Xbox, Nintendo Switch, PC

You are a fisherman who arrives in a strange new town. All are suspiciously hostile, and all warn you against going out fishing at night. So you do, and the things you catch start to get more…wrong. This Lovecraftian fishing game is mysterious and gently disturbing.
Xbox, PlayStation, Nintendo Switch, PC

A gothic horror take on the Pinocchio folk tale from a Korean developer, it has you tracking down Geppetto and slicing aggressive automatons on your quest to become a real boy. This has very distinct Bloodborne vibes, with its high challenge, Victorian look and weighty, steampunky weaponry.
PlayStation, Xbox, PC

In this story of a family’s immigrant experience in Canada, told through cooking and conversation, a Tamil woman takes an inherited cookbook with her to start a new life in a new country. It is a game about the importance of food in culture, and as an expression of love.
PlayStation 4, Xbox One, Nintendo Switch, PC