Sonic Frontiers is the best Sonic game in years 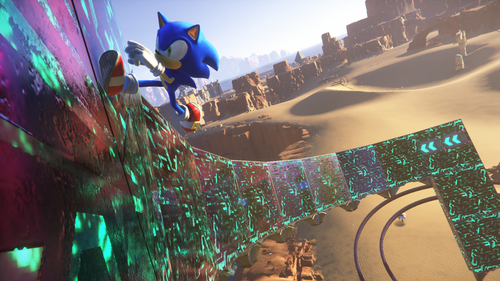 Sonic the Hedgehog’s latest video game adventure is his biggest and best in years, offering players a new spin on the lightning-fast hero.

Since the live-action Sonic movies, fans of the series had been shown a new side of the character and seen how he fit into a realistic world.

After a rocky reveal, with fans unhappy with how the game looked in early trailers, my expectations for this new game weren’t set high.

I’ve now played 23 hours of Sonic Frontiers on PlayStation 5 and the game has blown me away.

SEGA has proven the critics wrong and really hit the nail on the head with this game – almost.

Sonic is known for his high speed and spin, but it’s not widely known that he can pack a punch or two.

Combat overalls are a button-mashing display.

Square to attack, then throw in a random other button to mix it up a bit – it’s far from groundbreaking, but some of his moves look really cool (standard enemies are hardly a challenge for the blue blur).﻿

The courses are very intuitive, with a homing move to sonic launch to the next bounce ramp or enemy – these little platforming tasks and courses were very satisfying to complete.

Players must find the track towers, unlock them and go through their portals. There you can take part in many well-known tracks that are suitable for a lightning-infused hedgehog.

Among speed, jumping and ring collecting are a number of side puzzles and game mechanics.

From herding a group of ancient creatures, jumping rope and soccer-like games, to volcano flippers and hacking a computer in space invaders like fashion, SEGA really threw everything at the wall just to see what stuck.

There is also a random fishing minigame that was added to break up the zooming, jumping and ring collecting around the islands.

At first I felt weird about Sonic picking up a fishing rod, but it’s quick and very rewarding for the player.

The boss fights are on an epic scale. Sonic’s power will be put to the test as you complete the story missions in each zone (or island).

On normal difficulty, these boss fights rarely present a challenge. But they all offered a unique and exciting fighting experience.

All of Sonic’s best buds are there, Tails, Knuckles and Amy all add to the game’s surprisingly deep and emotional narrative.

Oh, and of course Eggman is also in the game.

Who would have thought that Sonic could fit so beautifully into a lifelike world away from the classic, sprawling green hills.

There are two game modes to play in, 4K to offer the player a higher resolution while playing but at a lower frame rate, and 60FPS mode.

60FPS mode is what I would recommend, Sonic speeds across the landscape so fast, you rarely have time to stop and check the fidelity of the flowers and trees.

While Sonic runs very smoothly on PS5, I noticed frequent pop-ins while driving through large open areas – the game often loaded the “prize” before the puzzle platformer.

These pop-in events took away from the game’s immersion as I was distracted by platforms appearing out of thin air.﻿

The overall camera work in this game is impressive, the game seamlessly switches between 3D and side scrolling angles and keeps up with Sonic’s incredible speed.

By default the game’s camera is set quite far from Sonic, to really understand the beauty of the game I would suggest adjusting the camera in the game settings.

The more I played Sonic Frontiers, the more I grew to love it. Although I was quite skeptical at first, my troubles were short-lived.

Is it the best game of the year? Not quite, but it was clearly never the expectations of the developers.

There’s no doubt that Sonic Frontiers is a fun addition to the series and does exactly what it’s supposed to.

If you’re a longtime fan of the series, this fresh take on Sonic is everything you could hope for.

The game is out now on PlayStation, Xbox, Nintendo Switch and PC.

To help promote the launch of the game, the Australian Sonic Frontiers the team has created an “interesting” custom controller with a huge price tag.

This custom Sonic-themed TagMODS controller, with blue “hedgehog” spikes along the back, is valued at $470.﻿

Although technically not for sale, players can try to win one by entering various contests on social media.

The most anticipated video games from 2022 and beyond

9News.com.au got early access to Sonic Frontiers on PlayStation 5 for this review.﻿