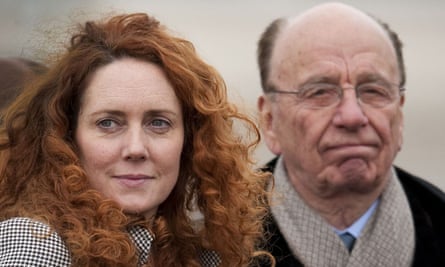 This week’s 200th anniversary of the Sunday Times gathered some of the biggest names in media at the headquarters of the British Academy of Film and Television Arts in London’s Piccadilly to celebrate one of the jewels of Rupert Murdoch’s empire.

But talk of famous covers and scoops among guests at Monday night’s event, where attendees included News Corp chief Robert Thomson and News UK chief Rebekah Brooks, was overshadowed by the news that broke three days earlier: the mogul’s plan to reunite his media empire. .

After a lifetime of deals, Murdoch, now 91, may be making his last play as he tries to merge News Corp – home of the Times, the Sun, the Wall Street Journal and the Australian – with Fox, the broadcaster of Fox News and the crown jewel of NFL games, as he leaves the running of his empire to eldest son, Lachlan.

While the 51-year-old heir, who shocked his father by abruptly leaving the family business in 2005 to move to Australia and pursue his own interests before being lured back a decade later, is poised to become chairman, there is much chatter over who will get the top job of running the day-to-day business.

Thomson had long been tipped to lead the combined group after a merger – he is Rupert’s right-hand man and the Australian regards him as a son. But with Lachlan in the driver’s seat, that’s not the case.

Then there is Brooks, another Rupert favorite who has long had ambitions to rise further. However, she lacks international experience and has the issue of the phone-hacking scandal on her CV, with new allegations recently made relating to her tenure as Sun editor. (News UK has always denied hacking took place at that paper, saying it only happened under its sister title News of the World.)

“Lachlan is not going to be running the business on a day-to-day basis. The really interesting question is, who will be? said a source. “I think it will be Lachlan’s decision who does, not Rupert, and that makes it interesting. Robert has historically been protected, but Rebekka is also powerful – she’s the one person all the kids talk to. She’s like another sibling and is very close to Lachlan.”

Lachlan, who insiders say opposed the decision to downsize the empire by selling 21st Century Fox’s global entertainment assets to Disney for $71bn (£63bn) five years ago, is seeking to rebuild scale in an era of global technology and media giants .

“Lachlan was furious,” says one former executive. “I think that was the nail in the coffin then [his brother] James also supported it. James and Lachlan, no matter what anyone says, got along. After that they stopped talking. I think that is still the case now. A scaled-down News Corp is the opposite of what he wants.”

The sale of 21st Century Fox also cut the younger James, once seen as the heir apparent, out of the line of succession and ended any possibility of a future potential dynastic battle.

The 49-year-old resigned from the board of News Corp two years ago, citing “disagreements” over editorial content, understood to include coverage casting doubt on climate change, and cutting his last formal link to the empire created by his father.

A reunited News Corp and Fox, valued at $9.7 billion and $16 billion respectively, would create a more muscular $26 billion business. This would put it on par with the market value of the newly minted Warner Bros Discovery ($30 billion), albeit a relative minnow compared to beasts like Disney ($180 billion) and Comcast ($134 billion), which bought Murdoch’s Sky for $30 billion pounds four years ago.

Special boards of each company are now considering the merits of a merger, and the relative value of each company to each other in the proposed share deal, but banks and shareholders appear to have already made up their minds.

Investors in Fox and News Corp both believe they are undervalued – shares in each are down 30% in the past year – which analysts suggest a tie-up is unlikely to solve.

There is also the cautionary tale of the similar recombination of CBS and Viacom after 13 years of separation. The business, now called Paramount, is valued at $12.5 billion — less than half the value of the separate businesses before the deal.

“On a standalone basis, this transaction raises more questions than answers as we struggle to see the strategic rationale for combining these two companies,” said Jessica Reif Ehrlich, an analyst at Bank of America, summarizing the broader market reaction.

Some investors in the News Corp camp are concerned about the “toxicity” of right-wing Fox News, and the practicality of the two multibillion-dollar lawsuits it is facing over allegations that it promoted the spread of theories that the US election in 2020 was set. .

Meanwhile, some Fox investors refuse to tie the hugely profitable business to a primarily publishing business, regardless of the leaps and bounds it has made striking commercially lucrative ad deals with Silicon Valley giants like Google.

Analysts at MoffettNathanson put Fox on track for record profits of $3.3 billion next year, while News Corp posted a $1.6 billion profit in the year to the end of June, a 31% increase.

Getting a deal through would require a majority of non-Murdoch family shareholders.

“There will be some investors on the margin who will have a problem with Fox News in their portfolio,” another source said. “And the Wall Street Journal [staff] loathe Fox News, they see it as toxic, stupid and think it will hurt their brand. But at the end of the day, it won’t matter too much because Fox News is so damn profitable.”

But with the Murdochs’ family trust controlling 39% of voting shares in News Corp and 42% in Fox Corporation, there’s a good chance they’ll get their way if the plan gets as far as being put to a shareholder vote.

“I think this has been in the works for two years,” the former executive said. “I give it a 75% chance it will happen, 25% it will be blocked. It’s all about Lachlan. Rupert is in his 90s – this is his last deal, it’s succession planning.”

When the Rupert era ends, the power behind the family trust will be shared equally between his four eldest children – Lachlan, James, Elisabeth and Prudence – while his two youngest daughters, Grace and Chloe, are financial beneficiaries.

Whether such a set-up can produce a situation similar to HBO’s hit drama Succession, which features members of a powerful family vying for control of a sprawling media conglomerate that has drawn endless comparisons to the real Murdochs, remains to be seen.

But for now, for Rupert, merging the two businesses he was forced to split against his will nearly a decade ago after the phone-hacking scandal is about securing a family legacy after seven decades of deal-making.

“At a certain level of money, it’s control that matters most,” says Claire Enders, founder of Enders Analysis and a longtime Murdoch watcher. “What this transition is about is the future control and restoration of the original structure of News Corp and a long-term umbrella for the newspaper’s assets.”

Despite the negative sentiment from investors and Wall Street about the rationale behind the merger, sources close to Murdoch say the deal is about business, not family.

“The proposal is 100% based on business rationale that is a combination of complementary portfolios of premium content to create a global leader in news, live sports and information,” the source said. “Any comment that suggests it has to do with succession planning is absurd and comes from sources without knowledge of the strategy and intent.”