FAYETTEVILLE — The city and the companies behind the electric scooters and bicycles available around town want to improve the experience for users and minimize potential problems with people who don’t use the devices.

The city contracts with two companies, Spin and VeoRide, to provide micromobility options to residents. Micromobility refers to light vehicles such as scooters or bicycles, especially electric ones, that people can rent for short-term use.

Spin last week finished distributing replacements for all its two-wheeled scooters. The new vehicles have dual brakes as opposed to a single brake, a hook for bags, a wireless charger for phones, turn signals, dual outriggers and a shorter tire to deter tandem driving. The company added the 100 electric bikes to its fleet at the end of September.

A separate app became available to residents this year called SeeClickFix that allows people to report a variety of non-emergency concerns to the city, such as potential code violations such as overgrown tree limbs and cars on lawns to potholes in the street. Complaints about scooters or electric bicycles go to the relevant companies, so that they can respond. People can also call a phone number visible on the vehicles to send complaints directly to the companies.

Both companies have crews that can respond 24 hours a day, seven days a week to reports of problems they receive.

“We’re just trying to keep improving the service that people use, and for people who don’t use scooters, have a minimum of problems,” he said.

The micromobility program in the city has been slowly rolling out since the city council passed regulations for it in the summer of 2019. The program started with 250 scooters from Spin in November 2019 and has grown since.

Scooters were primarily allowed in and south of the city centre, but the coverage area now includes most of the center of the city. The vehicles alert riders to no-go or slow-go zones by either beeping or using an automated voice alert. Speed ​​limits are automatically limited to 15 mph, although Spin’s electric bikes can reach 20 mph. The app does not allow users to lock and park their vehicles in certain no-parking zones.

The city holds an annual mobility survey that it posts on the city’s website to measure residents’ feelings about the vehicles. So far, dissatisfaction has remained low, Eifling said. He said he believes the city has avoided the pitfalls that micromobility programs in big cities have experienced by keeping the program well-regulated and limiting the number of vehicles administratively.

Cities such as Atlanta and Chattanooga, Tenn., issued bans after scooter-related fatalities and problems with bikers dumping the vehicles across the city became problematic.

Nationwide, micromobility companies have cut service in cities with no vehicle limits, said Daniel White, chief operating officer of Spin. Oversaturation in a market makes it so that no one company has advantages, he said.

Fayetteville is one of those viable markets, White and Thompson both said. Each company averages 4-5 users per vehicle each day during the peak months of July to October and about two per vehicle the rest of the year, they said.

Spin chose Fayetteville as one of its first locations to distribute the new scooters, White said. The electric bikes have also shown success with 3-4 trips per vehicle each day on average during the peak season, he said.

VeoRide once had electric bikes but phased them out by June 2021. Eifling said the early models cost the company a lot of money to maintain. The new e-bikes from Spin have fewer moving parts and are better protected against harsh weather, he said.

Thompson said the two companies are working with the city toward the same goals — to keep the vehicles from becoming cluttered, to respond to user demands and to be aware of any potential problems.

“We feel very pleased with the Fayetteville community and we’re happy to be able to offer a service to anyone who is a car option,” he said. 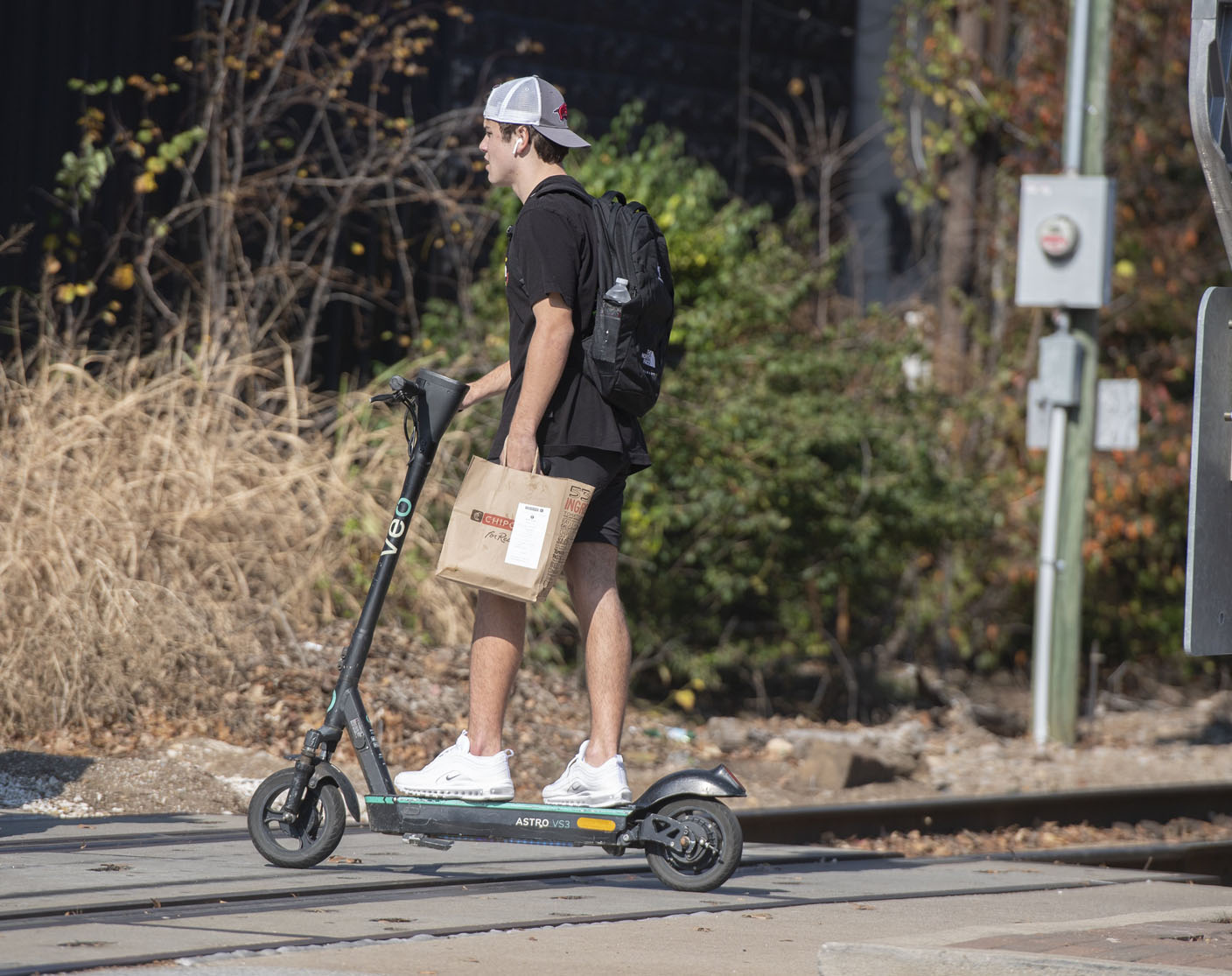 A person rides an electric scooter Thursday, Nov. 10, 2022, along Dickson St. in Fayetteville. Micromobility companies Spin and VeoRide have upgraded devices available to users in the city in an effort to keep the program viable. Visit nwaonline.com/221113Daily/ for today’s photo gallery. (NWA Democrat-Gazette/JT Wampler)

See also  Disneyland Paris and Orange renew their partnership through 2027 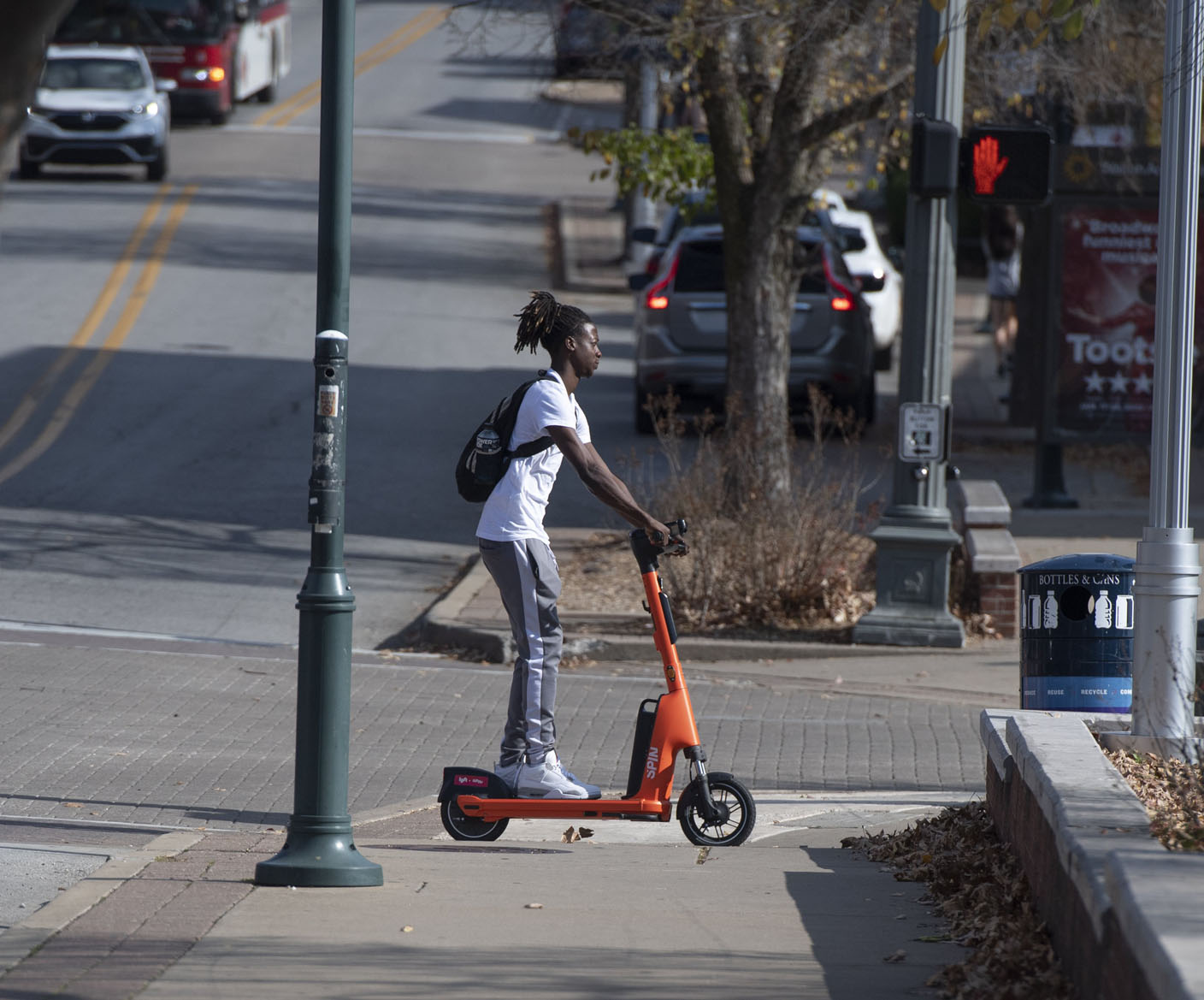 A person rides an electric scooter Thursday, Nov. 10, 2022, along Dickson St. in Fayetteville. Micromobility companies Spin and VeoRide have upgraded devices available to users in the city in an effort to keep the program viable. Visit nwaonline.com/221113Daily/ for today’s photo gallery. (NWA Democrat-Gazette/JT Wampler) 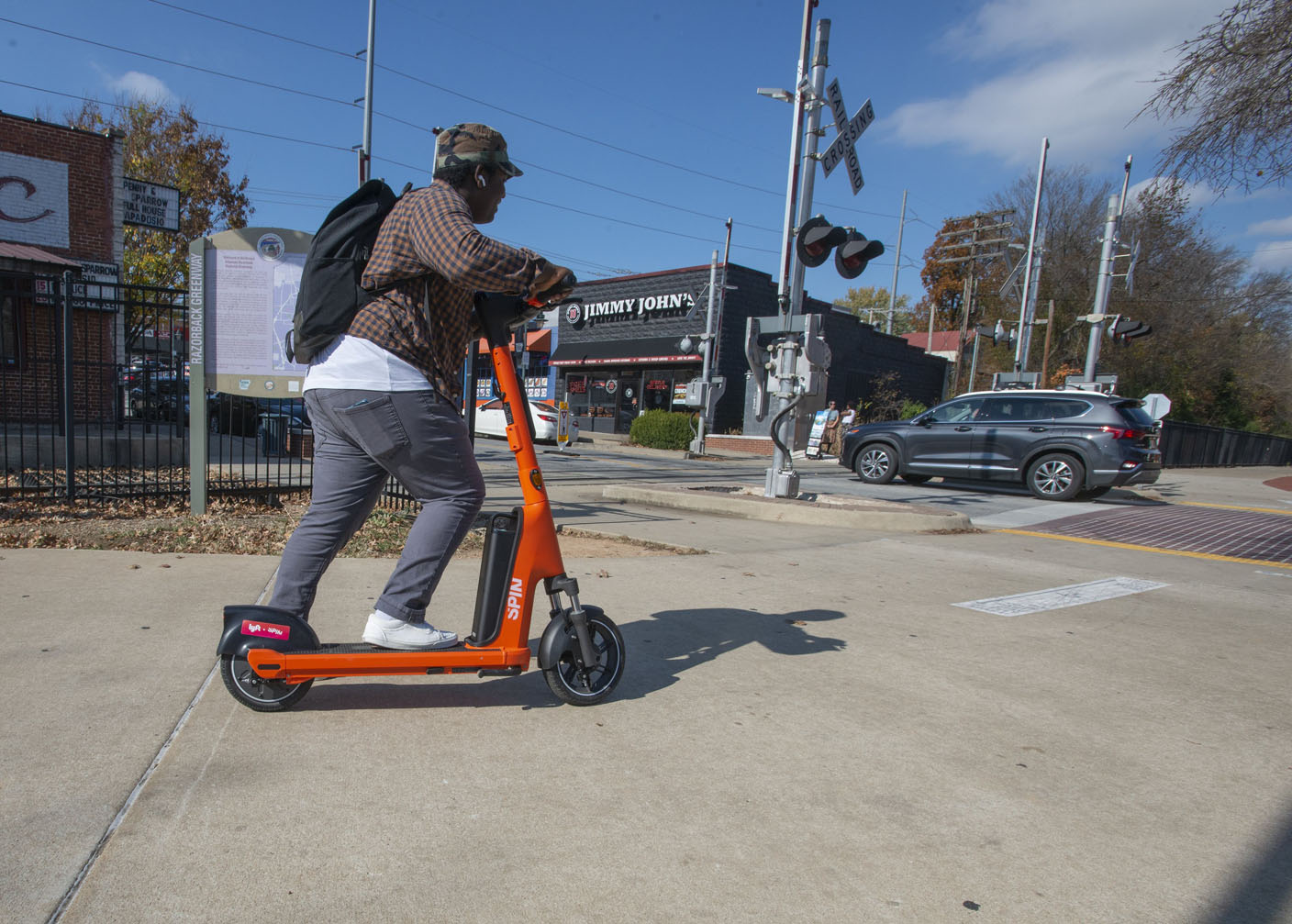 Joseph Umuhoza ((CQ)), of Fayetteville goes to the University of Arkansas on an electric scooter on Thursday, November 10, 2022. Umuhoza uses the scooters three or four times a week to get to class on time. Micromobility companies Spin and VeoRide have upgraded devices available to users in the city in an effort to keep the program viable. Visit nwaonline.com/221113Daily/ for today’s photo gallery. (NWA Democrat-Gazette/JT Wampler)