Despite releasing its first virtual reality headsets in May 2019, Meta is only now adding parental control tools to the Meta Quest VR headset.

After last year’s rebranding performance, all eyes are on Meta as they try to prove that their investment in VR was worth the name change. But with attention from the highest office in the United States on its safety features, Meta is trying to make its platforms safer for children by rolling out a series of parental control tools. 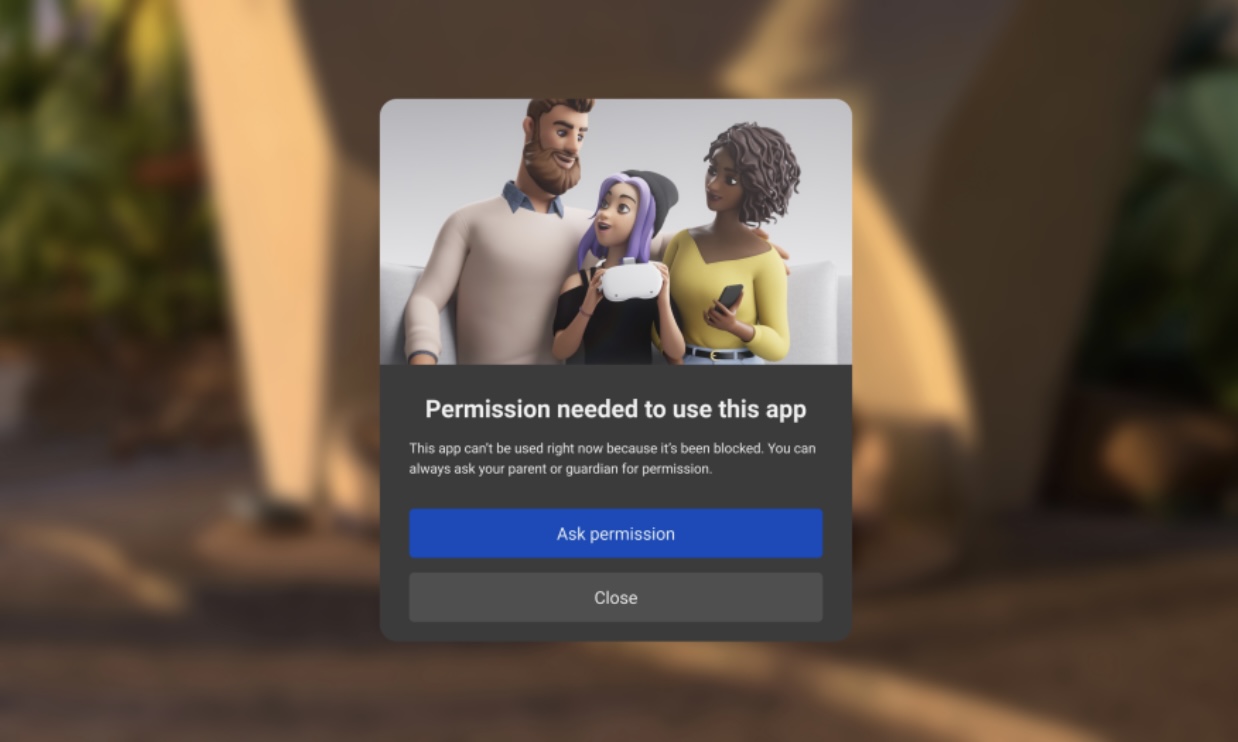 Currently, Quest headsets allow users to set up an unlock pattern, like a password, to access their device. In April, Meta said it would extend this functionality to specific apps. That way, if a parent doesn’t want their child to play a certain game on a shared headset, they can set a specific unlock code for that app.

In May, Meta plans to add a feature that automatically blocks teens from downloading apps deemed inappropriate for their age group by IARC (Quest profiles are linked to Facebook accounts, which is how the platform knows your age). However, if a young teen is using an account linked to their parent’s login, this defense may not be effective.

Over the coming months, Meta will continue to build out its suite of parental controls on Quest. Through the Oculus mobile apps, parents will have access to a parent dashboard, which allows parents to connect to their child’s account.

The company also opened a family center to organize the tools and other parenting resources. 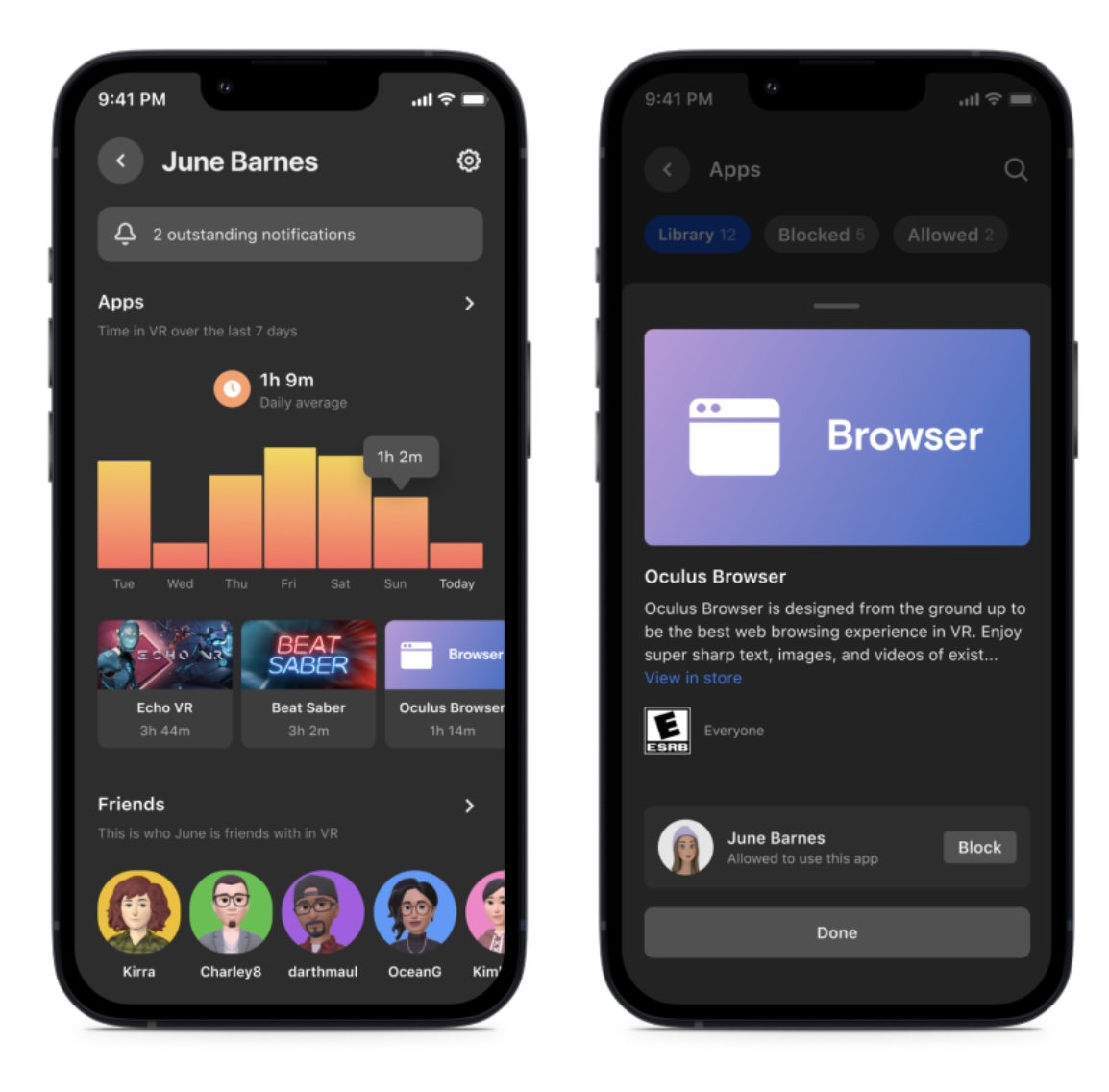 “The process is initiated by the teen, and both the parent and the teen must accept the experience,” Meta wrote in a blog post.

Putting these VR monitoring tools into a mobile app is a smart move for parents who might feel more comfortable using a mobile app than a VR headset. Through this mobile dashboard, parents can manage which apps their child can download according to their rating—so, for example, a parent can pre-authorize their teen’s account to download apps for all ages. If a teen wants to buy a paid app, the parent can approve or deny the request. The parent can also block the child from accessing certain apps, including the browser and Link, which connects the Quest headset to PC VR games. In addition, parents can see their child’s screen time, friend list and downloaded apps.

Quest headsets are intended for users aged 13 and up, but of course younger children will inevitably find their way into virtual reality. Even for teenagers, some apps are age-restricted, like “Horizon Worlds” and “Horizon Venues,” two of Meta’s social VR apps.

Only in the “Horizon Worlds” welcome area are there some human moderators present, but their job seems more geared towards helping users who may have questions about how to take a selfie in the metaverse.

“Horizon Worlds” has already been exploited for underdeveloped content moderation systems. BuzzFeed reported that it created a test world filled with content banned from Facebook and Instagram, such as QAnon conspiracies, but Meta’s content moderation system said it did not violate any guidelines. Some users even reported being sexually harassed and groped on the platform. Unfortunately, these experiences take place even in text-based online forums, but this type of harassment can feel particularly intense while in an immersive, unfamiliar virtual world. So far, Meta has introduced an optional personal limit feature in an attempt to curb this behavior.

TechCrunch asked Meta for comment on how it can prevent users under the age of 18 from accessing apps like “Horizon Worlds,” since many users reported that the platform is already overcrowded with children — several reviews of the app in the Quest Store include complaints of being followed around by misbehaving children.

“Today marks the first step in a longer journey, and we plan to add more options over time,” a Meta representative told TechCrunch. They pointed to app-specific unlock patterns as a potential solution, but this only keeps kids off the 18+ platform if their parents have the knowledge and foresight to do so. “Our parental control tool features will continue to evolve and expand over time as we learn more about what parents and teens need from our platform.”

Ultimately, parental controls are only effective if parents and teens use them well — but rolling out those railings is the least Meta can do.