‘I lie in the bath imagining I’m walking the Rialto in Venice’: my obsession with Duolingo | Apps 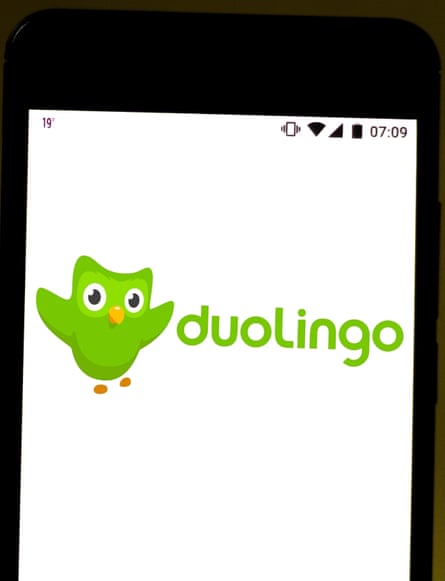 This morning, before checking in on my young son or making a coffee, I opened the Duolingo app on my phone and translated “They love to smell meat” into Italian. I’ve started my days like this for a few months now: wake up, wash my face, struggle with the gerund. I usually spend between 10 and 20 minutes on it while the kettle boils or I load CBeebies or write some emails. It used to be eBay. Then Wordle. Now it’s this.

Duolingo is a language learning app and quite easy to use. After choosing which language you want to learn, you are presented with about 100 skill sets divided by scenario or grammar (grocery, future tense, and so on). Each level is structured like the branches of a tree, and when you complete one, you move down the tree to earn gems to “spend” on the app or the hearts you need to complete the exercises. Make a mistake and you must correct it before moving on. It’s all fun and games until you make too many mistakes, run out of hearts and lose progress. This is when you’ll engage with Duolingo’s mascot, an official green owl named Duo who, if you’re anything like me, will ultimately define your self-esteem. Duo’s face is the first thing I see every day, and increasingly the last too.

Like Tinder, Duolingo launched 10 years ago. But while Tinder took off immediately, Duolingo’s success was more gradual. According to a spokesperson, 14.9 million people are now logging in daily, over 50% more than in 2021. The last big peak was when the Squid Game was released and everyone decided to learn Korean. Before that it was French, when Call My Agent! aired on Netflix.

Of course, it was the pandemic, when 30 million users worldwide downloaded it during the first weeks of the lockdown. I was one of them. Faced with the prospect of going absolutely nowhere anytime soon, it was the closest thing I could find to a way out. In addition, it was productive and free.

The most popular language is English. But for those who are already English speakers, the app has 41 complete languages ​​– Spanish and French being the most popular – with the additional options of High Valyrian (from Game of Thrones) and Klingon (Star Trek), but curiously no Filipino or Bulgarian. It’s not exactly a benchmark for international relations, although the number of users learning Ukrainian through the app grew by 1,171% this spring (Duolingo declined to provide comparable figures for Russian).

I started with Italian because I used to live in Italy so I spoke it pretty well already. I wasn’t fluent, but I was good enough to teach English to Fiat executives while living in Turin, making real friendships and sometimes dating. That pandemic summer, I kept it up for a few months, then lost interest, like most people (Reddit estimates it takes three to six months to complete a course), and deleted it.

It wasn’t until July, while re-watching The Godfather, that I realized the Sicilian dialogue was going over my head. So for the first time in almost two years, I downloaded Duolingo again.

After a few weeks, Italian development went well. There was no way of knowing, of course, but as I lay in the bath at night, I imagined myself wandering through the Rialto in Venice, buying tomatoes. I could compliment their smell, haggle and if the vendor tried to fool me, bleat”bye!” (Oh come on!) as I shake my fist. I quickly moved on without a mistake and started practicing out loud, telling my son that although “Africa is not a country” (Africa is not a country), at least “I will still be able to buy fish from the supermarket tomorrow” (domani potrei comprare il pesce al supermercato).

Encouraged by my progress, I added French (I want to brush up on my AS level before going on holiday with my in-laws). Why stop there, I thought, adding Portuguese (friends had just moved there and I wanted to feel connected to them) and even Latin (I’m a sucker for diversions!). Soon I flip between all four. I liked how easy it was, that I could quantify my progress in terms of points and also brag about it by sharing updates with other users.

If this sounds as much like a video game as a learning tool, that’s because it is. I asked Emma Clark, an Islamic garden designer with a solid working knowledge of Arabic, to have a go. “It’s good if you like playing video games more than learning languages” was her takeaway, and made me wonder if I’d become more interested in success than lying on my back.

Ask any duolinguist and they’ll tell you competition is key – a friend who’s learning French described it as “poisonous magic”. This can be a good thing, says Dr Cindy Blanco, Duolingo’s managing editor for learning content. “I taught Spanish at university in the US and in the classroom you could get them to do difficult things because of the social pressure to sit and get it done. When you’re learning with an app, if you feel confused, there’s no pressure to move forward – unless there’s an element of competition.” Blanco describes it as healthy, but I beg to differ. Users speak grimly about holding up streaks at great cost. One friend, who wished to remain anonymous, admitted to not only repeating exercises to maintain his now 213-day Spanish streak, but sometimes using Google Translate.

Chris Boyd, 38, who works in film, spent several years learning Russian on the app and can be described as a Duolingo survivor. Boyd became interested in Russian culture after his father left books about the Cold War lying around the house. That led to an interest in Russian cinema, but it was a trip to Moscow that made him actively learn. “It struck me how beautiful the language is – somehow it’s both lean and lush at the same time,” he says.

After completing a course at Pushkin House in London, he first used Duolingo as a kind of supplement. But it didn’t take long for it to take over. “You quickly learn to hack it and try to get through as many lessons as you can for the points, rather than the words and sentences staying in your brain for more than a couple of hours,” he says. He also hates the owl (I recently came across a Medium post called “Duolingo needs to chill” based on its aggressive use of notifications).

The real question is whether it actually works and how quickly. In an article for the Atlantic, Ta-Nehisi Coates, who learned French as an adult, noted “the symmetry of language ads that promise fluidity in three weeks and weight loss ads that promise a new body in about the same days”. For me, learning Italian on Duolingo is like putting WD-40 on my bike; it just keeps the wheels turning. French was also easy because I had a solid base. But a month of Portuguese has already made me question how much of a polyglot I really am, despite these languages ​​supposedly being linked by “lexical similarity”. How quickly you learn varies greatly, although there is a sweet spot. A friend told me that it wasn’t until week six that she felt something click (she’s approaching a year and learning Italian).

Still, as any linguist will tell you, there’s an element of nuance that an app can’t provide. “Ultimately, using a language is a social thing, not a game,” says Francis Jones, professor of translation studies at Newcastle University. Jones speaks five languages ​​confidently, but can speak about 20. He tried to learn Swedish on Duolingo, but found the vocabulary too random to be of much use (there’s a funny Twitter account called @shitduosays which brings together the best). He also completed five levels of Chinese “but couldn’t have a conversation”, he says. “Its job, which it is very good at, is to show you how to remember words, pronounce them and read and recognize certain vocabulary. Unfortunately, you can’t always transplant it just like that.”

Jones’ second language is Dutch, which he learned while living in the Netherlands in the late 70s. “It’s the ideal environment, the language comes at you from all sides,” he says. “But more than that, I needed to make a living, and then I met my wife. Motivation is essential, he says. I learned Italian because I had mapped out a romantic future for myself, but once there, I needed I also to eat.

It comes down to how you like to learn. I’m terrible at grammar because I have no interest in screws and bolts and have mainly learned Italian by imitating my housemates. I was said to speak Italian with a Northern/Milanese accent and swear with a Venetian. For someone like me, Duolingo is ideal. Jones, who generously calls my approach “holistic” or “top-down” because I imitate the phrase, memorize it and only then break the phrase down into words, prefers to work from the bottom up: “I’m analytical. I like to know the bones, the nuts and bolts, but then you go out, you use it.” This is how he became fluent in Dutch in about three months, and why I probably never will.

I didn’t learn Italian to become a linguist. I liked who I was in Italy, and when I’m gone too long, I get homesick for it. Knowing another language feels like a superpower. To speak a new language, Jones says, “one can switch to a new personality, like trying on a new set of clothes”.

As for learning it on an app, I suspect Duolingo’s limitations will prevail. As Boyd says, “There’s nothing that can really replace the feeling of sitting in front of another human being and trying to communicate with them.”