Gill gets the nod over Kishan as India count down to a home WC | Cricbuzz.com 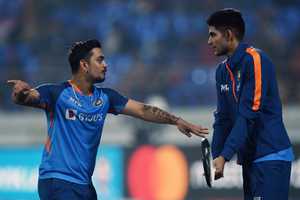 India have decided to pick Gill over Kishan, who scored a double hundred in his last ODI

With the 2023 World Cup preparations entering the final stages, hosts India have a lot to do and a big problem on hand when they take on a gutsy Sri Lanka in a three-match ODI series beginning on Tuesday (January 10). Barring the Asia Cup, which will be played in the 50-over format this time, India have 15 scheduled ODIs and so workload management of the all-format regulars will be the buzzword when you throw in an IPL, Australia Test series and a (probably ) WTC final in the mix.

Against that backdrop, on the eve of the series opener on Monday, the Indian team management took the call not to rush Jasprit Bumrah’s comeback just yet on a precautionary note. The pace spearhead, who has been out of action since September last year, had not even made it to Guwahati – the venue for the first ODI. Among those who have, the focus now shifts to the remaining group of seniors on the comeback trail – skipper Rohit Sharma, Virat Kohli and KL Rahul – and the changes that brings to how India’s top order shapes up for the marquee event in October-November.

While Kohli and Rahul were rested, Rohit’s thumb injury during the ODI leg of last month’s Bangladesh tour has ruled him out of action for the subsequent two Tests and the just-concluded three-match T20I series against the islanders at home. That presented an opportunity for Ishan Kishan, who grabbed it with both hands by notching up a double century to push for a WC berth. Although his left-handed and wicketkeeping credentials weigh heavily on his case – what with India dropping Shikhar Dhawan from the plans and a question mark looming over Rishabh Pant’s comeback from the accident – India have confirmed Shubman Gill as their second opener.

By extension, this nails the front-line keeper slot for KL Rahul despite his slightly wayward form of late, meaning the only middle-order conundrum for now is picking one between the in-form duo of Suryakumar Yadav, who just hacked his third T20I century . in less than seven months, and the returnee Shreyas Iyer.

Likewise, the bowling and all-round department is also full of informed candidates. Although a happy headache, the captain-coach duo will have some tough conversations given that the backups have all impressed in their limited opportunities in the prolonged injury-enforced absence of seniors like Bumrah and Ravindra Jadeja. It will boil down to Arshdeep Singh’s left-hander versus Umran Malik’s express pace and both could be in contention at some point in the series with Mohammed Shami and Mohammed Siraj as their frontrunners for now.

Sri Lanka, meanwhile, have a fairly similar squad from their 2-1 T20I series loss for the upcoming ODIs and will be hoping to replicate their performance in the longer format. Apart from the series decider in Rajkot, the visitors battled hard in the T20Is as they came within striking distance of winning the Mumbai game before actually thrashing India by 16 runs in Pune to draw level. More such competitive performances against India could give them the much-needed morale boost before they face an already qualified New Zealand in their last bid to claim the last remaining automatic qualification spot for the World Cup in March. With 77 points from 7 wins and 12 losses in the ongoing Super League, Sri Lanka are currently in ninth place – just outside the qualifying group.

Obviously, the format of late has not been their forte and against an almost strong India side, the task would be more daunting. As such, Sri Lanka would depend on their in-form opener Pathum Nissanka to provide more stability at the top in the 50-over format and their captain Dasun Shanaka to lead by example once again. A major miss from Sri Lanka’s side has been the absence of Bhanuka Rajpaksa despite his exploits in the shortest format and on Indian pitches in the IPL. However, the tourists have bolstered their bowling by giving a recall to leg-spinner Jeffrey Vandersay who can be quite handy in these conditions.

What to expect: A batting-friendly surface has been the norm in Guwahati. Early sunset in the winters can bring dew into the picture earlier than expected, making the hunt a preferred choice of the captains.

Fielding three spin options in Axar Patel, Washington Sundar and Yuzvendra Chahal will also give India batting depth right up to No. 8. Shami and Siraj could share the new ball duties in Bumrah’s absence, with vice-captain Hardik Pandya as the third pace option.

Leggie Vandersay could see in for the visitors. Pacer Lahiru Kumara should also be back in the XI, ahead of uncapped ODIs Dilshan Madhushanka.

See also  I give up on stealth games

“Both openers (Gill and Kishan) have done very well. But looking at how both have gone through, I think it’s fair that we give Gill a fair run because in the last few games Gill got a lot of runs” – Rohit Sharma