Giannis Antetokounmpo is looking at elite company with another big season 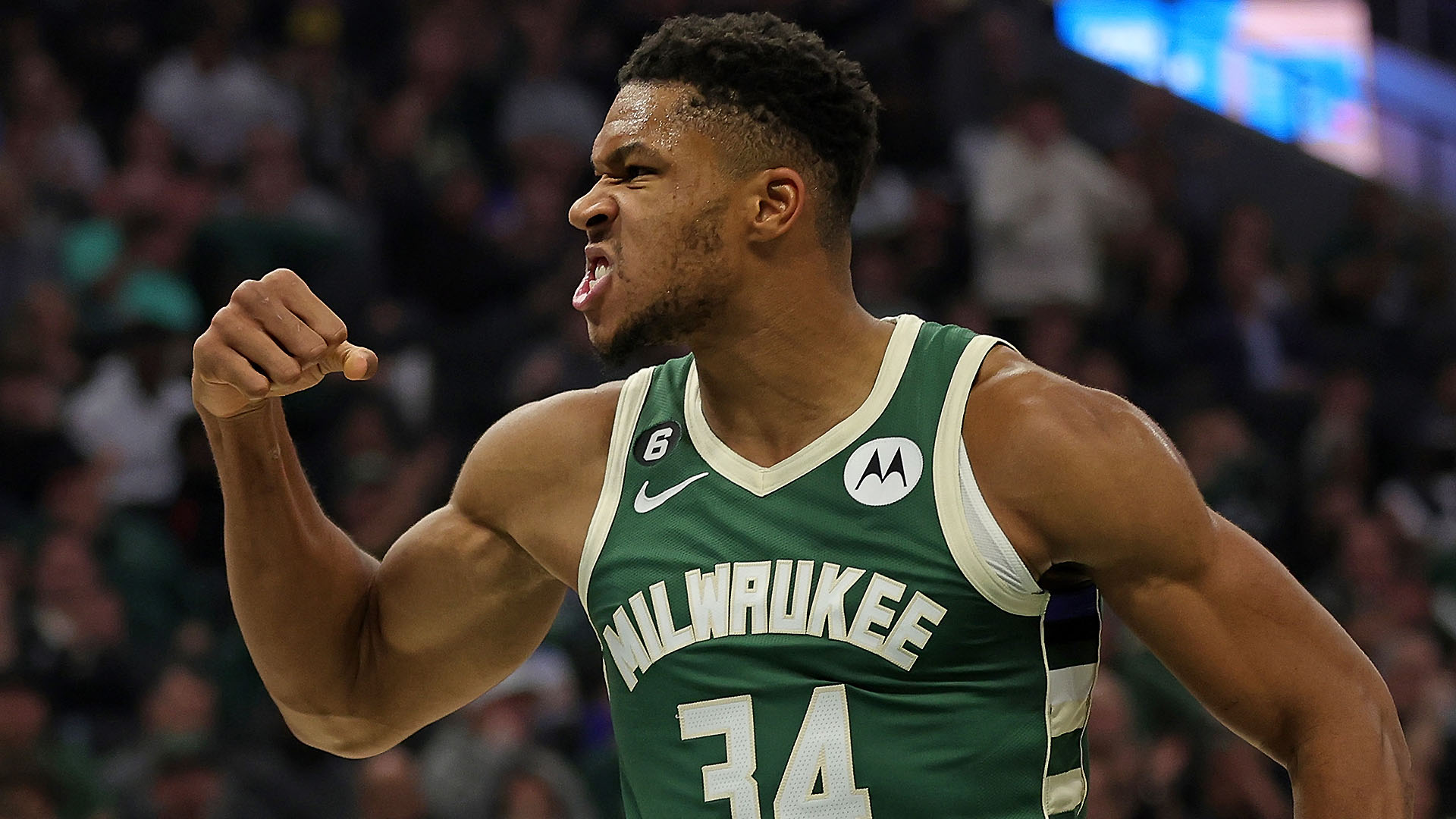 In the last 4 seasons, Giannis has 2 Kia MVPs, a championship, a Finals MVP and a Kia Defensive Player of the Year award.

There are times in a player’s career when the hoop seems twice as wide, when the game comes easily, when the wins roll in almost nightly and championships follow. That’s when he’s at his peak, and if he’s lucky, he’ll have Twin Peaks, where he’ll enjoy a decade of dominance and a place among the all-time greats.

But before greatness reaches a decade, it must travel half a decade first.

That’s where we find Giannis Antetokounmpo as he tries to stitch together five incredible seasons in a row. He’s off to a solid start in that regard, averaging 31.3 points and 11.8 rebounds per game and has the Bucks once again near the top of the NBA heap.

“He does everything the right way on and off the court, plays unselfishly, plays defense, changes games with blocked shots, rebounds and passes,” Bucks coach Mike Budenholzer said. “He has a belief in team, a commitment to team. Giannis is Giannis, he’s special, very unique. We’re all grateful to be a part of this as he goes on his journey.”

In the last four seasons (2018-22), Giannis has a pair of Kia MVPs, a championship, a Finals MVP and a Kia Defensive Player of the Year award. He also dropped 50 in the title game against the Phoenix Suns in Game 6, which was one of the best Finals performances ever. And arguably, had Khris Middleton been healthy, Antetokounmpo might have had a second title last season.

Coming off another big season, where would Giannis’ half-decade of dominance place him all-time? Well, since the NBA-ABA merger in 1976, the league has witnessed a number of players who crushed it for five straight seasons. To be considered for this conversation, that player had to win at least one championship—several of which have multiple titles—at least one regular-season MVP and one Finals MVP. Even with that, a player still might not make the cut (sorry, Kevin Durant, Dirk Nowitzki, Kevin Garnett).

Here’s what Antetokounmpo is up against as he pursues his place in a half-decade of history among these 10 (in no particular order):

Michael Jordan, 1988-93. He’s on the short list of players with multiple half-decades worth mentioning, forcing you to pick one. But in that stretch, Jordan won three titles, three Finals MVPs, three regular-season MVPs, led the NBA in scoring all five seasons, earned the Defensive Player of the Year award and captured two steals. This is perhaps the gold standard of the half decade and definitely his bill as he became an icon and bigger than basketball because of all of the above plus endorsements and “Space Jam” in theaters in 1996. When you mentioned the initials MJ from 1988-93 meant that you discussed Michael Jordan… or Michael Jackson. Anyway, pretty big deal.

Take a look back at Michael Jordan’s legendary legacy.

LeBron James, 2011-16. Curiously, his half-decade of dominance began promisingly; LeBron still had deep scars from his “decision” and an embarrassing defeat in the 2011 Finals to the Mavericks where he struggled. And then he went on a tear. What followed was epic basketball: His 45-point, 15-rebound Game 6 demolition of the Celtics in the 2012 playoffs, dozens of highlights with the “Big Three” Heat and the fiery playoff performances when he returned to Cleveland and especially against Cleveland. Golden State Warriors in 2016 when he brought Cleveland its first championship. It all added up to three titles, three Finals MVPs and two MVPs that set off a water-cooling debate about who is the greatest player ever.

Larry Bird, 1983-88. Larry became “Larry Legend” during this time, made even more impressive by the power of the era. Remember, this decade was arguably the golden age of the NBA, before the expansion began to dilute the talent and before players often moved on in free agency. It was difficult for one player to stand out above all others, given the amount of greatness. But Bird won three straight MVPs, joining Wilt Chamberlain and Bill Russell for that honor, along with two titles and two Finals. His steal against the Detroit Pistons and assist on Dennis Johnson in the 1987 Eastern Conference semifinals rank among the greatest playoff games of all time. His playoff duel with Dominique Wilkins in the East ’88 semifinals was fascinating; Bird came out on top in that one too. And then his grudge matches with Magic Johnson and the Lakers became contract TV and transformed the NBA for good.

Take a look back at the best highlights and plays from Larry Bird’s storied NBA career.

Tim Duncan, 2002-07. This is where he won three of his five titles, two of his three Finals MVPs and both of his MVPs. It was here that Duncan was in his prime and in his element at both ends of the pitch. That’s when Duncan put the Spurs on one of the all-time great runs and enabled the franchise to own the 2000s. While Duncan wasn’t statistically superior to others on this list, his overall impact, especially in the postseason where he raised his level of play, was undeniable. Yeah, from a stylistic standpoint, let’s just say he didn’t sell any sneakers. But in this part of his career, all of San Antonio will insist that he put the big fun in “The Big Fundamental.”

Look back at Tim Duncan’s illustrious 19-year NBA career that was filled with MVPs, Finals, championships and more.

Shaquille O’Neal, 1998-2003. “The Diesel” kept a full tank in those five seasons, all with the Lakers, which started just before the Shaq-Kobe dynasty and ended right after. He was younger and just as energetic with Orlando from 1992-96, but no wiser, and while he won a title with Miami in 2006, he was clearly on the decline by then. Prime Shaq was perhaps the greatest force the NBA had ever seen, certainly since Chamberlain. Shaq won three titles, three Finals MVPs, his only MVP (he’ll insist he should have had one more that went to Steve Nash) and a scoring title. And that just goes to show how difficult he was to defend without resorting to Hack-A-Shaq.

Relive the moments and more that made Shaq a force in the NBA.

Stephen Curry, 2014-19. This is the period where he changed the game, for better or for worse, and became an all-time great. He won a pair of MVPs (the first unanimous MVP in NBA history), and captured three of his four titles. Of course, his 3-point shooting (43% in this stretch) was epic and set him apart from every other superstar, both active and retired. Even though Curry won a title last season and his only Finals MVP, and is off to another hot start this season at age 34, it’s hard to imagine him duplicating what we saw in those five seasons as creates a legacy.

Kareem Abdul-Jabbar, 1976-81. He won three MVPs during that stretch, duplicating what he did from 1971-74 when he was a more dominant player (leading the league in scoring twice), mostly with the Bucks before joining the Lakers. (But that was before the merger, so it doesn’t count.) And he won more championships later in his career than the one title he captured in this stretch. But Abdul-Jabbar wasn’t the best player on the Lakers in the mid-to-late 80s…Magic Johnson was. From ’76-81, he was consistently great and served as the bridge between some pretty average Laker teams until the start of the “Showtime” era.

Moses Malone, 1978-83. Can’t leave out Malone as he won three MVPs during this time and reached the NBA Finals twice, winning the title after joining the Sixers in ’83. The first year with Philly was magical for so many reasons. Malone joined the 76ers in a sign-and-trade deal as one of the league’s first major free agent defections. He famously predicted that Philly would go “fo, fo and fo” in the playoffs (the Sixers actually lost a game in that run). He spent the previous four seasons with the Rockets, dragging an otherwise average team through deep playoff runs. When Houston made its first NBA Finals in 1981, he made another famous prediction (that didn’t come true) when he boasted that he and “four guys from Petersburg, Virginia” could beat Larry Bird and the Celtics in that series. Malone won four rebounding titles in those five seasons and finished second in the league in scoring (31.1 ppg) in 1981-82.

Kobe Bryant, 2005-10. He actually suffered in the first two seasons of this stretch while dealing with average teammates and dismal results. That said, Bryant was a singular force, with two straight scoring titles (35.4 and 31.6), an 81-point masterpiece and other nightly feats of the spectacular that produced his only MVP season (2007-08). Then, when Pau Gasol arrived, Bryant took those feats deep into the playoffs, winning back-to-back titles and a pair of Finals MVPs. Freed from the shadow of Shaquille O’Neal during their dynasty at the start of the decade, Bryant was eager to prove he belonged in the main role, and it’s safe to say he passed that test.

Take a look at these plays and moments that made Kobe Bryant an iconic player in NBA history.

Magic Johnson, 1985-90. One of four players on this list to win three MVPs in five seasons, Magic was the league’s premier player, from a winning standpoint, in the latter half of the 1980s. He won three titles and a Finals MVP and, of course, was the heart and soul of “Showtime,” as the Lakers transformed the game and elevated the league. Johnson led the league in assists in back-to-back seasons and improved as an outside shooter during that stretch, enough to take over the scoring role when Kareem began to age and then retire.

Shaun Powell has covered the NBA for more than 25 years. You can send him an email here, find his archive here and follow him on Twitter.

The views on this site do not necessarily reflect the views of the NBA, its clubs or Warner Bros. Sports Discovery.