The new year could not have started with a sterner test for Brecon than having to travel to the home of league leaders Newbridge, writes Ron Rowsell.

Nor could the game have come at a worse time or under worse conditions. After a period of eight weeks in which Brecon had played just one game, they faced a team that had won all eight of their previous league games and collected a trial bonus point in each of those games.

Brecon were also unbeaten, but with their game based on expansive rugby, the wet, heavy conditions and persistent rain were certainly not what Brecon would have wanted. However, the conditions were the same for both sides, and in this top-of-the-table encounter, it was expected that the outcome would depend on which side could adapt best and be able to cut down on errors.

On both counts, Newbridge came out on top and emerged clear winners of bonus points, although the final scoreline did not really reflect the intensity of the game.

The foundation of the Newbridge victory was based on their simple, accurate kicking and aggressive competition at the breakdown. 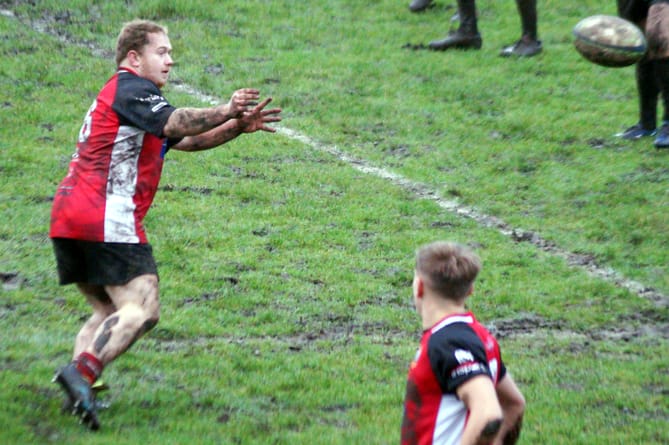 They had three players in key positions. Half-back partners Matthew Davies and Simon Veal along with full-back Robbie Turley kicked beautifully throughout the afternoon. They kicked long when necessary or precisely when they had time and space, and their kicks not only won territory, but became weapons of attack. They regularly found the wet heavy ground with the kicks in front.

The chasing was also effective and it put pressure on the Brecon defenders who struggled to collect and clear the wet heavy ball with equal distance or accuracy.

Under pressure, Brecon made mistakes and three of Newbridge’s tries came directly from a failure to gather and clear effectively. There could be no doubt that Newbridge won the kick-off by some margin and that ultimately led to their emphatic victory.

The warning signs were on the cards in the first minute of the match. In possession from kick-off, their big forwards drove hard at the Brecon defense on the halfway line. Finding their drives repelled by a strong defensive line, center Jonny Paynter put a grubber kick through towards the touchline. Brecon’s defense should have been able to deal with the kick even if it meant knocking the ball into contact and conceding a line out on the 22. Instead, two players attempted to control the ball with their feet. The attempts failed and winger Sam Watkins twice managed to get his foot on the ball, hack his way forward and score. To mix matters up, Turley added to the conversion with a brilliant sideline effort.

Seven points down after just two minutes of play was not the start Brecon wanted, especially in the conditions. To be fair, they worked their way back into the game. Their line worked well both on throw-ins and opposition balls. Ioan Edwards, Alwyn Lee and Logan McIntosh showed good hands when taking the slippery ball in full extension and regularly threatened or stole the ball on the opposition throw-in. The scrum was also impressive. Once or twice Newbridge got the upper hand but for the most part the front row of Andy Nicholl, Aneurin James and Lewis Smout along with their replacements Richie Davies and Iwan Dowling Jones pushed the opposition and it was Brecon who, for the most part, had gone forward the ball. It was in the use of the ball that the biggest contrast between the two sides became apparent. By nature, Brecon wanted to keep the ball in hand while Newbridge worked space through forwards and then kicked into position. Brecon’s ambition almost cost them a second try. Attacking down the blindside in their own half a pass was intercepted and only some good defending and a poor inside pass allowed Brecon to escape.

That incident aside, however, now Brecon were working their way into the game, although for the most part it kept some distance from the home try line. After twenty minutes they got the score they deserved. A big line out win at halfway and powerful runs by Logan McIntosh, Alwyn Lee, Andy Nicholl and Ollie Lewis laid the platform. Geraint Workman delivered a quick ball from a ruck and Morgan Price sent out a lovely long pass which Jake Crockett ran on to. He broke the defensive line but was knocked on the ankle. He managed to get the ball away to Sam Hellard who ran into the corner. The conversion failed but with a quarter of the game gone Brecon were back in touch and the momentum was with them.

Brecon won a penalty at a scrum on halfway and set up a line in the home 22. For the Brecon support it was all very encouraging but a lopsided throw led to a home scrum and a long clearance kick that was incredibly close to the touchline near the Brecon 22. Ryan Price collected beautifully and passed in. Unfortunately, in collecting the ball, he touched the line and Newbridge had a platform deep in the Brecon half. They made the most of it with an almost unstoppable line out drive which was eventually held up on the 5 meter line. From here Newbridge attacked, first through the forwards and then they moved the ball wide with Turley onto the line and gifted the score to Watkins. Turley converted again.

As time ran out in the first half, Brecon took play into Newbridge territory only for a catalog of errors to allow Newbridge to extend their lead before the break. A kick attempt through the defense was blocked and the loose ball hacked up the field. The ball slipped on the ground and an attempt to fall on the loose ball only bounced the ball into the path of the onrushing Watkins who broke forward again and won the race to score.

At the start of the second half, Brecon had a mountain to climb. Chasing the game Brecon’s play was ragged with ambitious passing in the conditions not holding. Newbridge won two penalties and from a five meter line out drove over for a bonus point converted try.

With the game now almost out of reach, Brecon did not give up. Ioan Edwards, Will Prosser, Alwyn Lee and Richie Davies all turned up well, but the collective accuracy was not there and the game entered a long spell of death. Newbridge’s Thurley kicked a penalty and Brecon threatened after a great kick from Carl Blacker 50 – 22. Ollie Lewis and Sam Hellard almost created something but again Brecon were hit with a drag. Brecon were committed to attack and when Newbridge were awarded a penalty in their half they made a quick push and kicked forward into open space. Center Johnny Paynter got to the ball first and hacked on. As the ball approached the line, Paynter and a Brecon defender dived for the ball. The ball bounced off the Brecon defender and over the line. Paynter was the quickest to recover and scored, allowing Thurley to end the game with a conversion.

The defeat, and its nature, is a setback for Brecon. Now the priority must be to put that behind them and focus on a tough league game at Pontypool United next Saturday and the cup game at Ammanford on the 21st. How well the season will go now depends on how well Brecon respond to this reverse. Now is not the time for the head to drop. Now is the time to take the defeat, learn from it, build on the strengths, eradicate the mistakes and move on, better than before.