With the Dodgers’ Mookie Betts on first base in the top of the inning, the drone entered the stadium’s airspace and dived near the field of play, forcing the referees to stop play for several minutes. The players pointed to the flying object, and San Diego second baseman Jake Cronenworth wrapped up his arm like he was going to throw a baseball at it.

Because a criminal investigation is ongoing, MLB declined comment Monday. However, the drone flight was a clear violation of an FAA temporary flight restriction for sporting events, which prohibits unmanned aircraft from flying within 3,000 feet of any stadium with a seating capacity of 30,000 or more one hour before the event until one hour afterward.

The attendance at Saturday night’s Dodger-Padres game was a record 45,139, including standing room. According to the FAA, the law applies to regular and post-season games for MLB, NFL, Div. I NCAA college football, NASCAR Sprint Cup, Indy Car and Champ Series races.

Both federal and local law enforcement agencies typically investigate drone violations, and according to sources, MLB will cooperate fully with authorities following this latest incident. Petco Park was the scene of a previous drone incident in May 2017, when an unmanned object slammed into the field during a Padres-Diamondbacks game.

Teams and leagues are in a bit of a bind trying to deter drones after legislation expired Oct. 5 that previously allowed stadium security to work with federal guards to intercept unmanned objects. With that legislation now in limbo, unauthorized drones remain a recurring threat.

The NFL, MLB, NCAA and NASCAR wrote a joint letter to Congress back in June that advanced a proposal from the Biden administration that would have extended and expanded the existing law to prevent new threats, which was originally signed in 2018 and just expired. 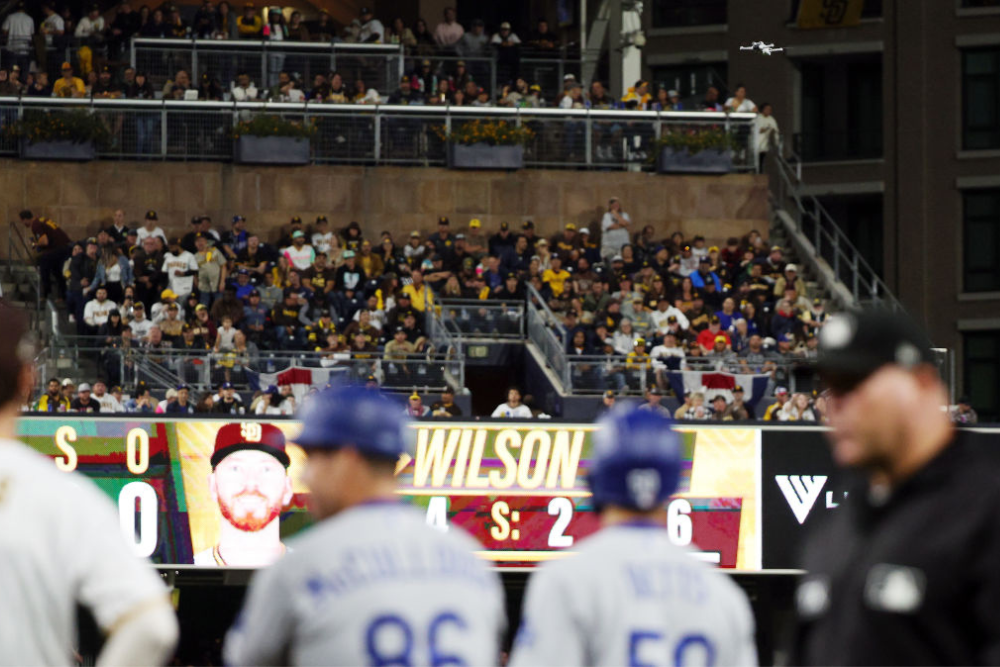 A drone entering Petco Park forced the umpires to stop Game 4 of the NLDS.

Biden’s proposal would not only have empowered federal agencies on the ground to destroy drones, but also expand drone detection and mitigation technology to be used by state, local, territorial and tribal law enforcement.

Just before opening night in September, NFL security chief Cathy Lanier told Bloomberg News that she was concerned about “the nefarious actor” who could crash a drone inside a packed stadium or perhaps launch an attack and “catastrophic outcomes.”

One of the drone technology leaders is Dedrone, a company that provides protective tools to clients such as the Atlanta Falcons, New York Mets, Pimlico Race Track and IndyCar’s Firestone Grand Prix in Florida. Drone. Dedrone’s cameras and software can identify and track nearby drones and pilots, while they’ve also built a product known as Defender that governments can use to pinpoint drones to hack into their motherboards and force landings.

According to reports, drone operators could be fined as much as $37,377 and potentially prosecuted. Just last season alone, the NFL reportedly had 1,400 drones entering stadium airspace. The FAA has estimated that there are 860,000 registered drones in the United States, and that number could expand to 2.6 million by 2025.