John Mathieu and Cristin Barth are both creative directors at creative agency GYK Antler, but as John says, they’re “friends first and foremost.” Working and socializing with their shared network of creative partners across the city they’re based in, Boston, for the couple, it can be hard to tell where work ends and “drinks after work” begins. Outside of their professional relationship, their friendship has taken them on holiday together, they’ve attended each other’s weddings and they generally share inspirations and new influences with each other.

This strong and enduring dynamic began about a decade ago, when the two met at Arnold Worldwide. John, an art director, and Cristin, a strategist at the time, only knew each other socially until they were put on several concept jobs for the likes of Jack Daniels – and discovered how like-minded they were in the process. “At first I really wasn’t sure what to make of Cristin,” says John. “She was not a traditional commercial. Not an art director, and not a writer. She just had a fresh, unconventional way of solving problems. I still feel that way.”

Cristin shares that she had admired John’s work and thought they could learn a lot from each other before working on their first joint project in 2015: a live stream activation for Avocados From Mexico. “Periscope [Twitter’s short-lived streaming platform], had just launched, and that customer was particularly keen to be the first on the market for emerging social technology, says Cristin. “I was a social media expert, so I was put together with the traditional art and copy team to launch something on the same day. We developed the ‘Avocado Cam’: a live broadcast of an avocado doing absolutely nothing. We had an illustrator friend of ours ready, drawing scenarios for the avocado to be in while viewers commented on their suggestions. It was a real ‘dawn of the social apps’ performance that we both look back on fondly.”

With John coming from a more traditional advertising background – portfolio school and an internship at Goodby Silverstein – Cristin’s social media expertise and alternative approach to problem solving meant the pair complemented each other from this very first project. For Cristin, it’s their differences that bring them together. “I don’t think being the same is complementary,” she says. “The things that can frustrate us at times are probably the things that also complement us… I think it’s simple. We’re always aligned with the same goal or end result, and we’re often thinking about how to get there in different ways .”

John adds, “We disagree on a lot of things. That’s why it works.” And when those disagreements come up, the duo likes to get it all out on the table — which Cristin says is one of her favorite parts of their dynamic. “We don’t hold back, but we hear each other and we always end up learning something new.”

After leaving Arnold Worldwide to pursue separate creative ventures—and discovering that wasn’t the right move—the CDs soon reunited in Allen & Gerritsen’s Philadelphia office, where they lived out of a hotel for a summer, and started new business. Not long after, however, former president and CEO of Arnold Worldwide, and an influential figure on their careers during their time there, Pam Hamlin, announced that she had joined GYK Antler in Boston. Within a few months, the couple had also joined the agency. “I started as a creative strategist and quickly transitioned into a creative director role,” says Cristin. “John and I run several accounts separately and a few as co-CDs, but we play a big part in each other’s work on a daily basis, like a sounding board or an extra set of eyes.”

See also  6 things that can get you banned on WhatsApp

Aside from simply making work life more interesting, they both agree that having a close creative partner improves the quality and usability of their work, which Cristin says is often inspired by “a good conversation” between the pair. John adds: “Coming up with creative ideas is easier when you know the person you’re working with. I can confidently predict what Cristin will think about a certain idea. It has gotten to the point where I can almost give feedback on her behalf.”

Still as like-minded as ever, the pair agree on the collaboration they’re most proud of so far: their work for consumer banking company Sallie Mae. “The client continues to deliver assignments that fit perfectly into our collective skill set,” says Cristin. “Everything has to be highly strategic, educational, content-based marketing with a tone and aesthetic designed to attract gen z. We believe in the power of work and the impact it can have. In fact, it’s the impact of work that drives us the most.” 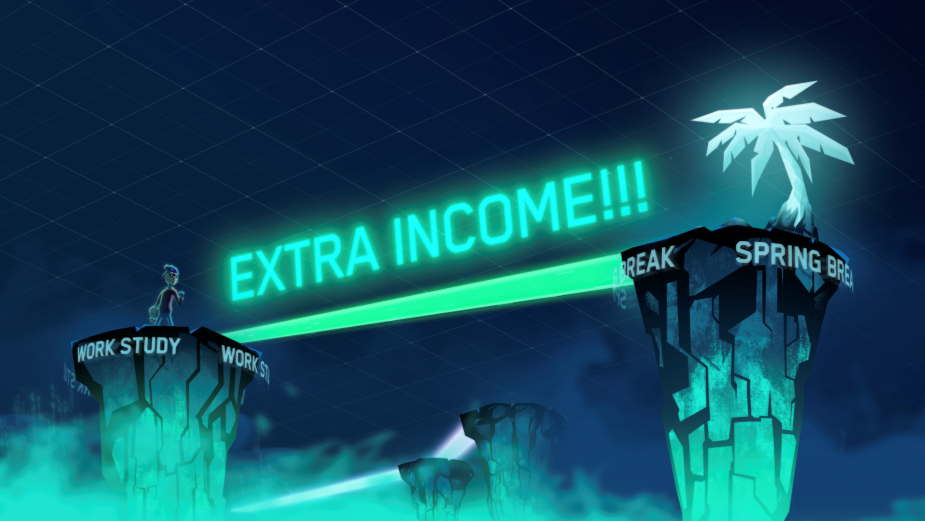 Recently, this account led them to create an animated series of financial aid infomercials called “Hacked”. Based on “bulletproof research and strategy,” Cristin says the episodes provide valuable answers to important questions about student finance — without appearing like traditional ads that might turn off Gen Z viewers. “Hacket” is a triumph in the demonstration of content rather than advertising, she says. “It’s written and executed beautifully, and it’s designed precisely for the platform it’s meant to live on. It’s everything we both believe perception-changing branding should be.”

Outside of their time in the office together, the pair draw inspiration from all forms of media, according to John – constantly sending each other articles, album covers, new songs, podcasts and more to spark discussions and new ideas. “We work hard to bring these influences into our work,” he says. This constant flow of sharing creativity and asking “have you seen this?” meaning the duo are forever learning from each other, expanding their range of influences. As Cristin describes it: “We are students of the industry for life.”

In an effort to keep learning and never graduate from this school of thought, she says that “being stuck in your ways” is simply not an option for them, especially in the marketing world where there is no longer just one way to do something on . And while the creative directors take in as much as they can and look ahead to the industry’s ever-changing horizon, Cristin says they are grateful to have found the right person to navigate with.

“I am inspired by the future of this industry every single day. Marketing has become a bit of a Hogwarts with all its escalators… I’m lucky to be lost without a map with someone like John.”