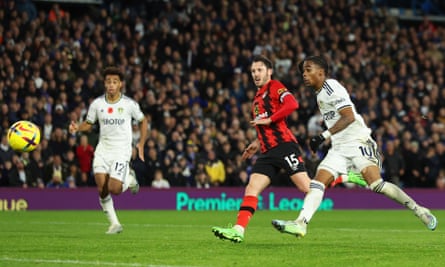 The Leeds squad marked Halloween with a fancy dress party, and in most of a shocking slapdash first half, Jesse Marsch must have suspected they were still in disguise.

With Marcus Tavernier excellent, Bournemouth were in full control but a couple of inspired substitutions ensured that thanks to Cyrsencio Summerville’s second winning goal in successive games, the visitors were consigned to a fourth straight Premier League defeat.

“In our good moments, you can see how strong we are,” Marsch said. “The consistency is lacking, but the belief is still high. That’s what I love about the team. But the first half was not our best. We dug ourselves a big hole.”

Although Leeds were initially confused by Bournemouth’s habit of playing between a back four and a back five, they started strongly. Within the first minute Summerville, the scorer of last weekend’s winner at Liverpool, accelerated into the area only to be clumsily hacked down by Marcos Senesi. Rodrigo stepped forward to take the penalty and after a somewhat elaborate drive he used his left foot to send Mark Travers the wrong way.

Marsch has played down his sideline celebrations recently, but when Rodrigo scored his sixth goal of the season – and third in three games – the American reverted to default mode, punching the air with unbridled abandon.

Bournemouth have a pretty useful left winger of their own in Tavernier and it didn’t take long for their summer signing from Middlesbrough to remind everyone of his talent. When Philip Billing crossed menacingly, Robin Koch could only head the ball as far as Tavernier, whose volley was too good for Illan Meslier.

Although Meslier parried Tavernier’s next shot, Billing – who tortured Pascal Struijk throughout – reacted quickest to hit the rebound high into the net.

If Jack Harrison’s move from left to right wing appeared to have reduced Leeds’ attacking threat, that represented the least of their problems. With Koch and Liam Cooper bullied by Dominic Solanke and Kieffer Moore, a static home defense were lucky not to concede at least three more goals before the break.

At least Leeds had Wilfried Gnonto on the bench. The striker, signed from FC Zurich in the summer, is already a full Italy international at the age of 19 and he replaced Harrison at half-time as Leeds switched to a 4-3-3. Before Gnonto could make an impression, a counter-attack scored Bournemouth again. Tavernier avoided Rasmus Kristensen all too easily – and not for the first time – before sending in a low cross which Solanke brilliantly flicked past Meslier.

The rain and the bows poured down in almost equal measure. At the time, Leeds fans pining for the injured Patrick Bamford could hardly have guessed that Marsch was about to make a transformational switch by replacing Marc Roca with Sam Greenwood. Greenwood is a central midfielder these days, but used to be a striker and emphasized the point by wrapping a foot around a bouncing ball and reducing the deficit with a sublimely curved half-volley from 20 yards.

Suddenly, Elland Road was once again familiar with the concept of hope. Such belief was justified when Cooper headed Leeds home from a corner. Given that Greenwood took the set-piece and that Gnonto – intelligent, incisive and blessed with a wicked change of pace – petrified the defence, redemption beckoned for Marsch.

It came when Gnonto collected the ball deep in his own half, broke forward and delivered a beautifully weighted pass into Summerville’s path. Some strikers might have lost their composure at such a crucial moment, but the 21-year-old Dutch winger proved a study in poise and precision, sliding his shot past the advancing Travers.

Almost immediately, fireworks began to light up the sky above Elland Road. “We never have easy wins,” Marsch said. – We don’t do things easily.