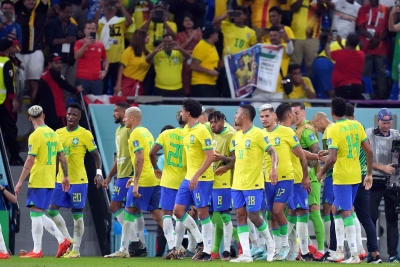 A goal seven minutes from the end helped Brazil record a 1-0 win over Switzerland and qualify for the knockout stage of the FIFA World Cup.

Doha: A goal seven minutes from the end helped Brazil record a 1-0 win over Switzerland and qualify for the knockout stage of the FIFA World Cup.

On Monday night at Stadium 974 in Qatar, Casemiro scored the game’s only goal.

The five-time champions join defending champions France for the knockout stage after registering their second straight win in the Group G encounter.

Casemiro’s first World Cup goal took the Brazilians’ tally to six points, while Switzerland remained on three points while Cameroon and Serbia, who played out a thrilling six-goal draw, have a point each heading into the final round of group league games.

After securing a 2-0 win against Serbia in their opening match, Brazil, with the win against Switzerland, are on six points from two matches and qualify for the knockouts with a game to spare.

Brazil will play its final group game against Cameroon on December 3.

Brazil lost too many balls against a solid Swiss defense who were also not caught in the dark when the floodlights went out briefly just before half-time.

The Swiss finally threatened shortly after the break when Silvan Widmer ran down Granit Xhaka’s right-wing set-up, but the Brazil defense hacked away his sharp Ruben Vargas-bound cross.

The introduction of Rodrygo made Brazil more dangerous with Richarlison, the two-goal hero against Serbia on Thursday, failing to meet Vinicius Junior’s cross 11 minutes into the second session.

And there was more frustration for The Selecao as they thought they had their first goal when Vinicius Jr found the net in the 64th minute, but a VAR overturned the goal for offside when Richarlison was ruled offside in the build-up to the move in the 20th minute out in the second half.

Brazil, who had been knocking on the door, finally opened the floodgates. Vinicius Jr rolls a sweet pass down the inside-left channel. Casemiro, just inside the box, turns and hits a first-time shot that ends up in the top right corner. Yann Sommerin Swiss goal, with his feet planted, had no chance, with the ball whistling into the back of the net.

“We knew it wouldn’t be an easy group. It was very hard against Serbia. Switzerland had a lot to offer. We were patient. It’s not always nice matches, the teams neutralized each other, small things make the difference, said Casemiro.

“I hit the ball perfectly, but the most important thing is to help the team,” he added.

Down by a goal, the Swiss had to abandon their defensive plan, as a result more chances fell Brazil’s way, but they were unable to add more goals.

Newcastle midfielder Bruno Guimaraes’ header was straight at Sommer, while Rodrygo had the best opening in stoppage time, but his thunderous shot was brilliantly blocked by Manchester City defender Manuel Akanji.