A clever Aussie mum has come up with a ‘brilliant’ five-minute laundry organization hack to keep her family of eight’s laundry on track.

The mother puts each of the six children’s clean clothes in separate parts of an Ikea shelf, and her children can then pick up the clothes themselves.

The mother said she “just had to do something” with her washing system for the “nuts” and can now organize laundry in just five minutes.

“The crazy thing is that I’ve come to enjoy doing it now that there’s a place to put everything,” she said. 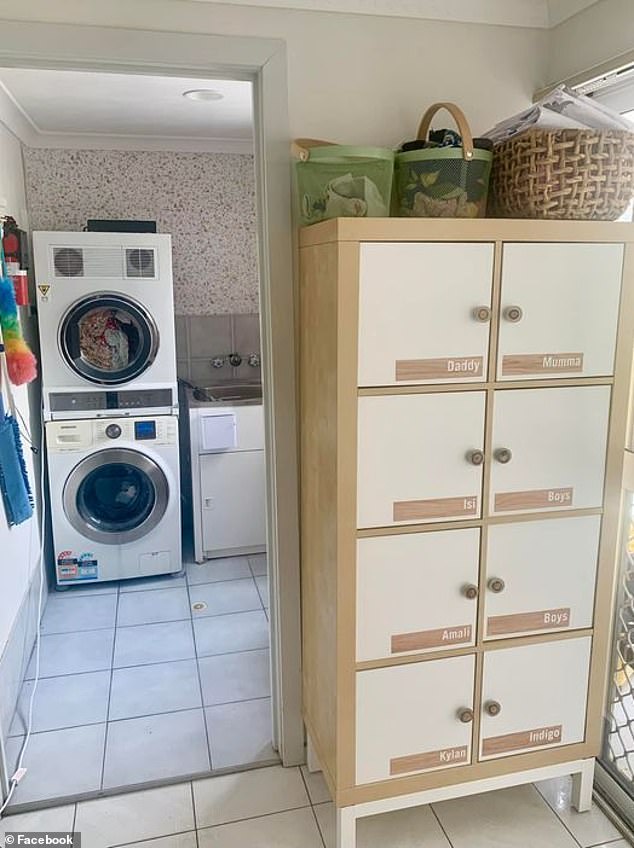 The mother established a laundry organization system using an Ikea shelving unit. She labeled another section with the names of each family member and puts their clean clothes in their section where they can then collect it daily

The mum shared her ‘secret’ to the popular Facebook group Cleaning and Organizing Inspiration Australia.

Mum used an Ikea Kallax shelf with inserts and a stand, and she made the labels with a cricut machine and vinyl from Kmart.

‘We are a family of 8, and we are finally washing, folding and putting away clothes!’ said the mother.

“You want to know my secret? This cabinet is amazing! I fold and sort by person as soon as the clothes are dry (or when I need space for the next load).’ 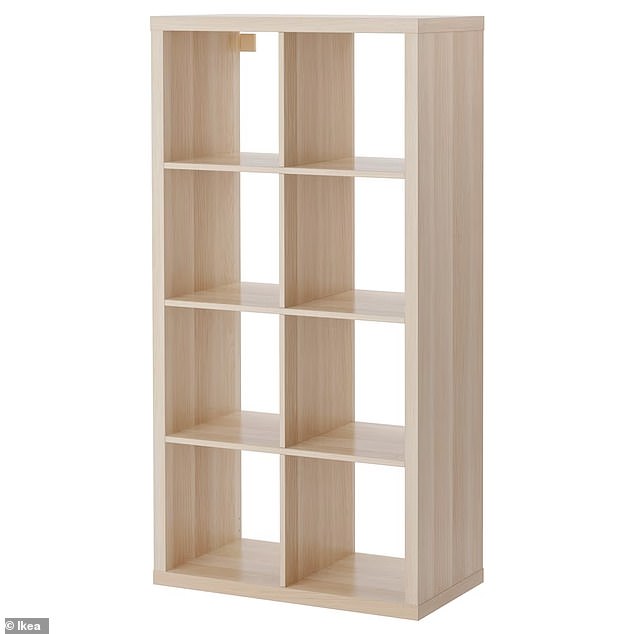 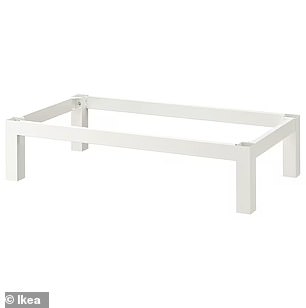 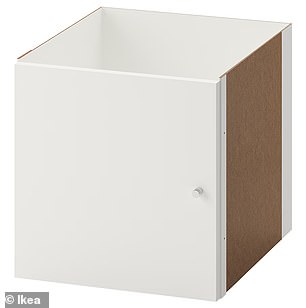 The shelf unit (left) sits on top of the $30 Kallax base. She bought eight (right) Kallax inserts for $15 and labeled each with a different name of family members

Would you try this laundry organization hack?

Each room in the shelving unit is for one of her family members and labeled with their name.

She also has two baskets for socks, and another for linen.

“I sort socks about once a week when the baskets are full,” she explained.

“Everyone is supposed to put away their clothes every day or they get a (not so gentle lol) reminder when their closet is full and I need the space. Guess what? It actually works!’

The mother explained that for clothes that crease easily, she folds them “carefully” or drapes them over the closet door, but said her family “doesn’t wear things like that”.

How to organize your laundry:

* Dedicate a shelving unit for laundry, such as the Ikea Kellax unit with inserts and rack

* Label each section with a family member name

* Place three baskets on top of the unit for socks, underwear and bedding

* After each wash and dry cycle, fold the dry clothes and place them in each family members compartment where they can collect them daily

* Place socks and underwear in the baskets throughout the week, folding and organizing them for each person once a week

Parents were inspired by the “fantastic” organizational idea.

“I need this in my life,” said one woman.

“I always wash and it just stays there until I start losing my hair. Sounds like a good idea, said another.

“This is one of the best ideas I’ve seen. I’m struggling so hard to stay on top of the fold, thanks for sharing,’ wrote another.

‘This is such a great idea! I will try to implement something similar,” commented another. 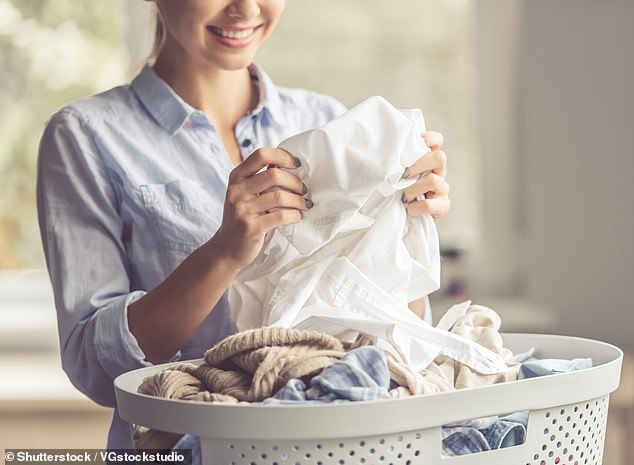 Aussie parents loved mum’s ‘fantastic’ organization hack and many want to try it themselves. But others believe that their children would still not collect their own clothes

Other moms loved the concept but didn’t think it would work with their brood.

“The million dollar question is how do you get them to take their clothes to their rooms,” laughed one mother.

‘Love this! So glad it works for you. Unfortunately none of mine would remember to put it away even though I asked them a million times,’ said another.

“Great idea, but my kids would just scramble through their cabinet, take what they’re looking for and leave a mess,” wrote another.

How to keep laundry clean and fresh

* Do not use too much detergent

* Keep whites whiter by making a homemade bleach cube, mixing one cup of baking soda with one cup of borax, half a cup of oxygen or oxygenated bleach, and water. Mix the washing solution and wrap it in a silicone mold or ice cube tray and leave them to dry. Add one to the washing drum for each load of laundry

Other moms offered suggestions by sharing their own laundry organization methods, many “refuse” to fold clothes as they think they will be messed up too easily.

“I just use individual baskets with their names on them and put it outside their bedroom doors. Yes, I still have to bother with getting the baskets back, but it’s better than a pile of folded laundry being knocked off the bed and onto the floor,” wrote one mother.

“Family of six here, I don’t use the dryer that much, but I put the dry unfolded clothes in everyone’s room in these tubs and they have to put it away themselves. Towels and bed linen are folded and put away by the children and are organized on a weekly list, as are dishes, bins, cleaning and other tasks around the home. Because everyone will earn the Internet password for the weekend, said a mother. 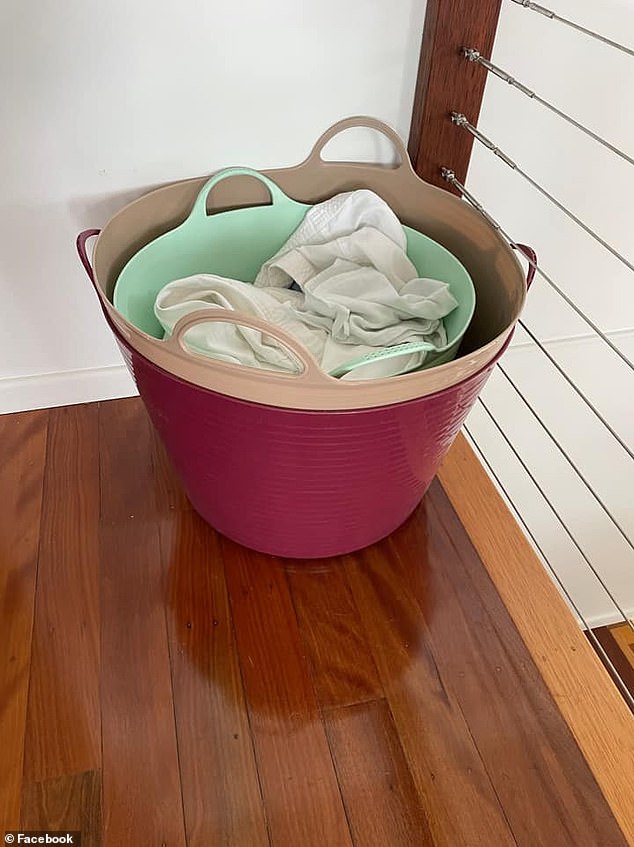 ‘We do similar, but I’m lazy and each member has a bucket and it’s washed, dried and put in the bucket. I refuse to fold because they make a mess and the kids put them away themselves (aged three, four and six) as they go into sorted cubes in their room,” commented another.

“I do the same, but on the coffee table, and if they are not taken and put away when the next lot is folded, then what is left is taken to the surgery shop! Given that they each get a quarterly clothing allowance that they have to manage themselves, it works out really well!’ another added.