One of the best things about hanging out with other hackers is the freewheeling brainstorming sessions that tend to occur. Example: I was at the Electronica trade show and ended up hanging out [Stephen Hawes] and [Lucian Chapar]two of the folks behind the LumenPnP open source pick and place engine that we’ve covered quite a few times in the past.

Among many cool features, it has a camera mounted on the part moving head to locate the reference marks on the circuit board. But of course this means a camera mounted on an almost universal two-axis gantry, and that got the geeks spinning. [Stephen] talked about how easy it would be to turn into a photo-stitch macro photography rig, which could produce incredibly high-resolution images.

Meanwhile [Lucian] and I thought about how similar this portal was to a 3D printer, and [Lucian] asked why 3D printers don’t come with cameras mounted on the hot ends. He had even shopped this idea around at the East Coast Reprap Festival and got some people excited about it.

So here’s the idea: near-extruder computer vision gives you real-time process control. You can use it to set the nozzle in Z. You can use it to tell when the filament is empty, or the steppers have skipped steps. If you had it really refined, you could use it to compensate for other misprints. In short, it would be a simple hardware addition that would open up a universe of computer vision software enhancements, and best of all, it’s easy enough for the home gamer to do—you’ll probably only need a 3D printer.

Now I have shared the brainstorming with you. Hope it inspires DIY 3DP innovation, or at least encourages you to brainstorm along below. 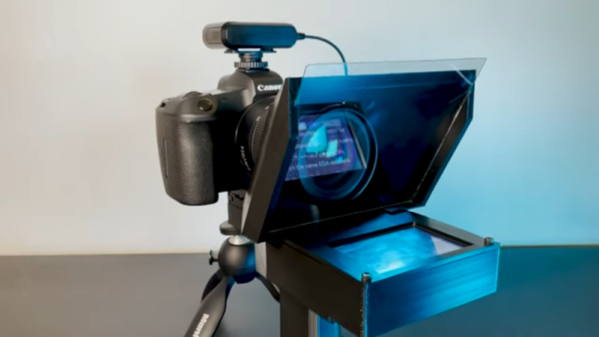 With everyone making videos these days, you may want to enhance your narration with a teleprompter. [Modern Hobbyist] can help. Since he makes videos – like the one about the teleprompter below – we assume he built it based on his own need for the device. In fact, this is his second teleprompter. The first was larger and not battery powered, so this new version offers more portability. The camera takes pictures through the teleprompter screen so you can look straight at the camera and still stay on script.

The project reuses some of the original teleprompter code, and displays a text file via a Raspberry Pi. There is also a control keyboard that allows you to remotely control the scroll speed. However, the real key to this project is the 3D printed housing. Well, that and the reflective glass screen. Given that, you can do the text display itself in a number of ways.

Apparently the portability of the build is somewhat limited by the weight of the camera. Of course, you could use something lighter or maybe add some counter weight to at least balance it out a bit. The 3D print files are on Thingiverse and the rest is on GitHub, so you can easily make changes if you want.

You’d think we’d see more teleprompter projects, and we do. We’ve also seen a hack that lets you see through your laptop’s screen on video conferencing.

See also  The best upgrades for Batgirl to get ASAP

Continue reading “At a loss for words? Try a teleprompter” → 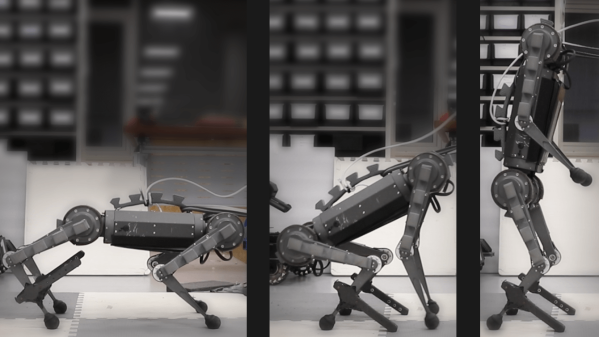 When it comes to movement, robots usually don’t do more than one thing at a time. Walkers stick to walking, and rollers stick to rolling. However, this simple method of allowing a cheetah-style quadruped to stand and even walk a bit is quite clever.

With only a pair of rigid struts attached to the shins of the rear legs, it becomes possible for the robot to lift itself into a stable standing position, and even shuffle around a bit. Not bad for a couple of bolt-on bits with no moving parts!

The robot style will look quite familiar to some of our readers. It’s similar to Boston Dynamics’ Spot, but it’s closer to MIT Mini Cheetah, whose design and brushless motors ensured eye-catching agility and speed. It has inspired not only countless DIY efforts, but also kits of parts from foreign sellers.

The image here should make it clear how it works, but take the time to also watch the short video embedded just below the page break, and see the process in action from start to finish.