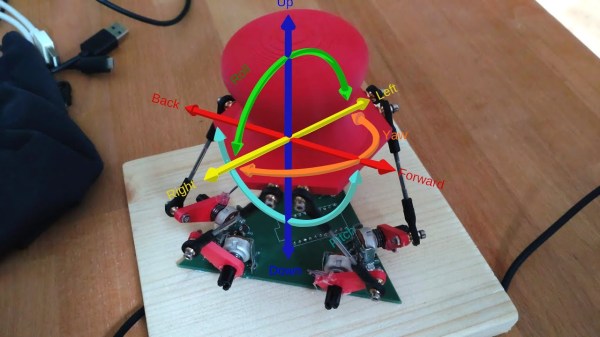 [Pepijn de Vos] wanted a 6DOF HID. You know, a 6 Degrees Of Freedom hardware interface device. These are the fancy controllers for navigating in 3D space, for use as Computer Aided Design, or Kerbal Space Program. And while we can’t talk to [Pepijn]its KSP dependency, we know that the commercially available controllers are prohibitively expensive. It takes some serious CAD work to justify the expense. [Pepijn] falls somewhere in between, and while he couldn’t justify the expense, he has the chops to design and 3D print his own.

Awesome, he has shared the design files for SpaceFox, linked above. There are 6 spring loaded potentiometers, supporting a floating printed Big Knob. The pots are fed into an Arduino Pro Micro, which calculates the knob’s position on the fly and feeds into the connected computer. On the computer side, the project uses spacenavd driver to interface with various applications.

SpaceFox V1 is really a proof of concept, just asks someone to come along and turn off the rough edges. [Pepijn] even includes a wish list of improvements, but with the caveat that he’s happy with his working model. If this project really gets your 6DOF juices flowing, please try making an improved version and share the improvements. And let us know about it! 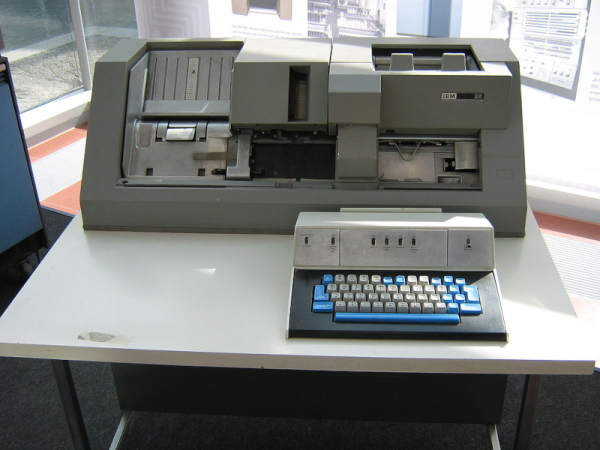 The recent Supercon 6 badge, if you haven’t seen it, was an old fashioned computer with a flashing light on the front. It reminded me of an Altair 8800, a PDP-11 or DG Nova. But even back in the day, only a few really programmed a computer with switches. Usually you can use the switches to swap in a first-level bootloader which will then load a better bootloader from some kind of storage like magnetic or paper tape. Most people didn’t really use the switches.

What most people did, however, was punch cards. Technically Hollerith cards, although we mostly just called them cards, punch cards or IBM cards. There were many different machines you could use to punch cards, but none were as popular, I would guess, as the IBM 029. Quite clearly, the models in the range were overwhelmingly what people used to punch cards.

For the uninitiated, a card was about the size of an old-fashioned dollar bill – the ones in style when Herman Hollerith invented them. The card was made of material not quite as thick as a standard folder and was divided into 80 columns and 12 rows. Later cards had more columns, but they never quite caught up to the same scale as the classic 80-column card. Continue reading “Retrotechtacular: programming with cards” → 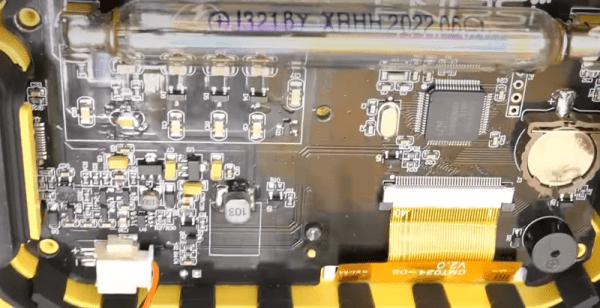 It used to be that every well-stocked doomsday bin had a Geiger counter. These days, you don’t need a big tube-based meter. You can reasonably get a compact digital instrument to handle your radiation detection needs. [DiodeGoneWild] assesses and demolishes such a unit from FNIRSI. The case looks like several other similar instruments we’ve seen lately, so presumably someone is mass-producing these handheld gauge cases. You can watch the video below. The meter reads the absolute radioactivity and can also measure cumulative exposure.

After measuring some common radioactive objects, we come to the decay. Inside, of course, is a regular pipe. A few screws reveal a typical rechargeable battery, a fairly simple PCB with microcontroller and battery backup for the real-time clock. Much of the board is involved in multiplying voltage up to the several hundred volts required for the Geiger tube.

The other side of the PCB only has buttons, a vibration motor, and of course the LCD. We don’t know how you can test the relative accuracy other than comparing it to a known-good meter. The bare tube was of course more sensitive without the plastic cover, but it could also be calibrated out.

A Geiger counter does not need to have many parts. Either way, a surprising number of things will set them off. 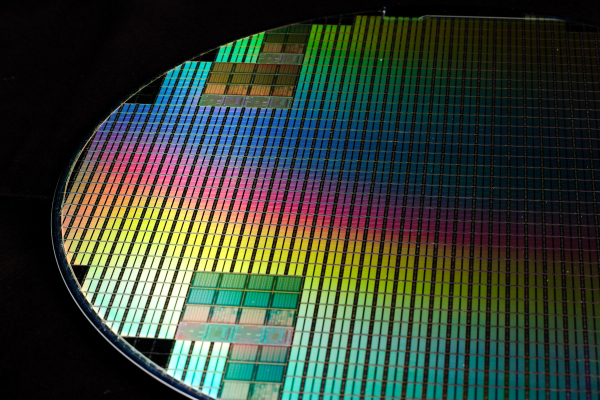 Once upon a time, countries protected their domestic industry with tariffs on imports. This gave the home team a price advantage compared to companies operating abroad, but the practice has fallen somewhat out of fashion in recent decades.

These days governments are more creative and use fancy export controls to protect their interests. To that end, the United States enacted an export restriction on powerful computing devices. In response, Chinese designers are trying to artificially slow down the hardware to avoid these rules. 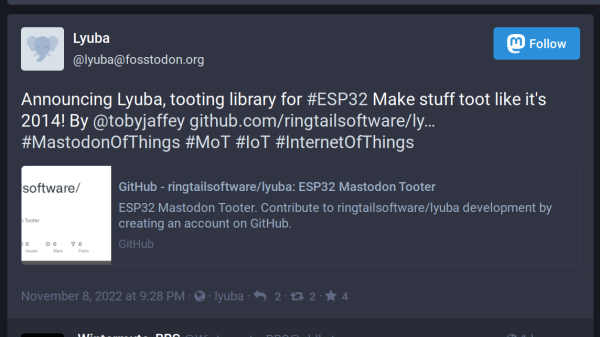 Since Twitter was officially taken over by Elon Musk a few days ago, there have been significant cutbacks, a stream of questionable decisions and uncertainty about the future of the social media platform. So it’s little surprise that a remarkable number of people, those in the tech and hacker scenes in particular, have decided to switch to (or at least bridge their accounts with) the distributed and open source Mastodon service.

Of course the hackers would be watching closely, and [Toby] shares a simple ESP32-based Mastodon client library for us to start with. Instead of “tweets”, messages on Mastodon instances are called “toots”, in keeping with the platform’s mammoth-like mascot. The library, called Luyba, is capable of sending beeps and includes a demo firmware. Built using C++ and with support for Platform.IO, it should fit into quite a few projects out there, allowing you to easily send beeps to whatever instance you find your home, as the library-backed demo beep demonstrates.

What can you do with such a library on your MCU? It turns out there are quite a few fun things – a home automation interface, a crawler trap, a web-based BBC Basic interpreter, or, given image support, a camera that tweets whatever it’s pointing at. It’s pretty much fun hackers might have given an API access to a microblogging service and some code that works with it. That said, for all the good that Twitter has brought us over the years, there’s a lot Mastodon could easily do better, between easily playable “Trending” sidebars, biases found in auto-crop algorithms, and inconsistent internal security policies. 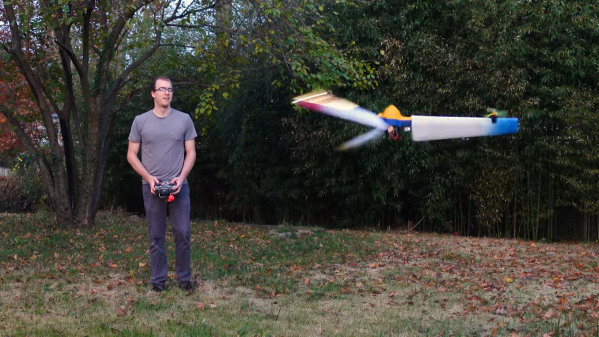 Most multirotor aircraft are about as aerodynamic as a brick. Unless all the engines are running and the control electronics are doing their thing, most UAVs are quickly destined to become UGVs, and generally in spectacular fashion. But by switching things up a bit, it’s possible to make a multi-rotor drone that continues to fly even without two-thirds of the engines running.

We have been following closely [Nick Rehm]its cool spinning drone project, which basically eschews a rigid airframe for a set of three airfoils connected to a central hub. The overall pitch of the blades can be controlled via a servo in the hub, and the whole thing can be made to rotate and lift thanks to thrust from tip-mounted motors and props. We have seen [Nick] manage to get this contraption in the air, and hovering is pretty straightforward. The video below covers the next step: gaining control of the pitch, roll and yaw of the spinning blades of doom.

The problem is not trivial. First of all, [Nick] had to decide what the front of a spinning plane even means. Through the clever use of LED strips mounted on the airfoils and some POV magic, he was able to visually indicate a reference axis. From there he was able to come up with a scheme to vary the power of each engine as it moves relative to the reference axis, and modulate it in either a sine or cosine function to achieve roll and pitch control. This basically imitates the cyclic pitch control of a classic helicopter – a sort of virtual swashplate.

The results of all this are impressive, if a little terrifying. [Nick] is clearly in control of the plane even though it’s spinning at 250 RPM, but even cooler is the bit where he kills first one and then two engines. It struggles, but it’s still controllable enough for a bumpy but safe landing.